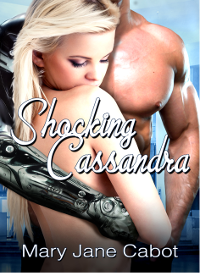 Shocking indeed… more like electrifying! Cassandra isn’t having her needs met by her scientist/inventor husband, John. When John brings home his latest project for a field trial Cassandra doesn’t know what to think. “Michael” is John’s project and is a perfect specimen of a man in almost every way (maybe even better in some areas). He is incredibly handsome, cooks, cleans, follows orders, sleeps on command and knows exactly how to satisfy a woman. But he isn’t really human. He is a highly advanced robot created in a lab and programmed into one helluva perfectly sexy and enormously endowed man package. John leaves Michael with Cassandra while he goes on a business trip and the field testing begins. Initially, Cassandra is not pleased with being left with Michael until she begins to see just how useful Michael can be… from doing the dishes to making her coffee to ravishing her in every way possible. This may sound like a book that belongs in the sci-fi genre but Mary Jane Cabot has crafted this story so well it feels completely realistic… as does Michael. It is a damn good thing they don’t sell “Michaels” because I would max out every line of credit available to me to get my hands on one.

The story itself is creatively written and delivered with such reality that you will immediately be sucked into Cassandra’s world. Her character is relatable in many ways and written in first person with seriously entertaining dialogue and narratives. I didn’t see a single typo or grammatical error and the text flows smoothly for an easy read. Erotica readers will be extremely pleased with this book. It has a unique, well-written storyline and lots of vividly descriptive sex scenes. Seriously, the sex scenes alone are worth it. I’ve never read anything quite like it. The author’s ability to turn the unbelievable into reality is impressive and I am greatly looking forward to reading future works.

An exhausted Cassandra takes a painful fall during a tennis lesson. She arrives home and Michael (the hunky guy/robot) plays doctor and puts her on the couch to bandage a skinned knee and massage her twisted ankle….

…..He scooted further down the couch to fix my knee. Gently raising my leg, he began to clean the wound, while I kept pushing the hem of my short tennis dress down to try and cover my underwear. After a few tries, I gave up. He put a small bandage on my knee, then ran his hands over my legs, looking for any other injuries. I almost moaned at his touch. He moved to the foot of the couch at my feet and slowly removed my shoes and socks, being careful not to pull or twist anything. He gently laid those hands on my ankle and the pain immediately began to subside.

“Nothing is broken. I have a working knowledge the human skeletal and muscle system and I can massage the area back into shape. I can fix it enough so you can walk without too much of a problem.”

I didn’t respond. He had my bare foot in his lap and the other foot was resting behind his back. My knees were apart and he was between my legs. My senses were starting to scream, but I didn’t pull away. I gave in to the feeling and I kept telling myself I would just let him go on for one more minute before I stopped him. I put my head back and closed my eyes.

He spoke softly. “You are also very tense. You will heal much faster if I make your muscles relax. I also have a knowledge of all the pain and pleasure points of the female body.”

He started with my foot, gently, but at times firmly, massaging; moving up to my ankle and then to my calf with excruciating slowness, as he made his way to my knee.

I felt a firm hand on my other knee as he slowly spread my legs farther apart. The fabric of my panties tightened over my pussy and I began to breathe faster. Both of his hands were at my thigh and he kneaded my flesh, moving higher and higher. I groaned and started to raise my legs but he stopped me.

Just short of the upper limit of the inside of my leg and my crotch, he stopped. I almost screamed in frustration as he began on the foot of my other leg. I began to jerk around, but he put a hand on my stomach until I quieted down. I focused intently on what his hands were doing and also my own heightened senses. I obsessed over every touch and every finger pressure, as he methodically worked his way up my other leg. I felt my wetness begin to leak into my underwear. Finally, at last, there was nowhere else for his warm hands to go. He put one hand on each leg and spread me open even further, forcing the lips of my pussy to open under my panties. The rough cotton fabric rubbed against my clit and my inner lips. I gave a soft scream and began moving my pelvis around in search of his hands. One of those hands slid between my panties and my skin. I began to moan and violently thrash around. His palm came to rest on the wet hair between my legs and his fingers spread out over my belly. Finally, I felt his thumb cover my clit. He began to slowly move the thumb back and forth massaging my clit into life. I was on the verge of going out of control when he reached up put his other hand on the side of my face.

“Shhh. Don’t move, don’t make a sound. Just let it come by itself. Let it take over your body. Just let it happen.” ……