Here’s an author interview with Eden Walker. Take it away, Eden…

END_OF_DOCUMENT_TOKEN_TO_BE_REPLACED

Eden Walker (nicknamed Aziza, or Beloved) specialises in hot, humorous and heartfelt romance fiction and in 2017 she was nominated for an Ufere Award as Author of the Year. She first began writing love stories on a whiteboard as a teen, the advantage being that she could rub the risque bits out before anyone saw them! Now she is having great fun going public. Starting with short stories and poetry, she then brought out a steamy African romance series for Ankara Press: The Seeing Place and its sequel, This Crazy Paradise. In 2017 she published One Night in Venice with Tirgearr, as part of the popular City Nights Series. Look out for its sequel, One Night in Denpasar!

END_OF_DOCUMENT_TOKEN_TO_BE_REPLACED 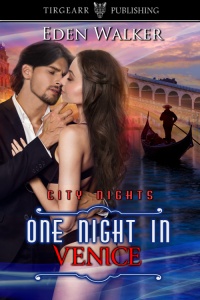 CITY NIGHTS: ONE NIGHT IN VENICE