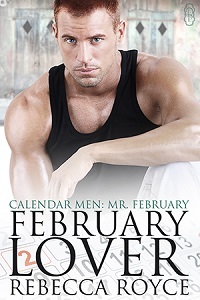 February Lover by Rebecca Royce is the second book in the Calendar Men series from Decadent Publishing. It tells the story of Aidan Roux, a man who fled New Orleans fifteen years ago, leaving behind the woman he loved, for reasons he barely admits to himself. Now he’s back for a brief visit to his mother before moving on, both literally and with his life.

However, a health crisis with his mother means Aidan has to stick around. Having seen his old love, Stacey, he knows that the spark between them is still there, but knows he can’t act on it, because he’ll soon be gone. He has no wish to hurt her all over again.

Stacey has other ideas. She’s a woman that knows what she wants, and between them, she and Aidan come up with an idea that works for them both. They’ll be lovers for the month of February, and in return, Aidan will pose for Stacey, for the charity calendar she’s eager to get involved in.

Naturally, things aren’t quite as straightforward as they appear. Will this couple get their happily-ever-after, or has the pain of the past simply scarred them too deeply?