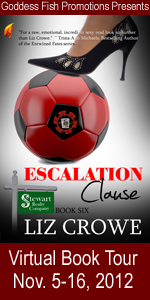 In Praise of Hans

Hans is my muse. He is a typical German–tall, blond, and organized to a fault. He can keep many details in his lovely noggin up to and including the various connections and cross connections of the characters in the Stewart Realty series. (He resembles Chris Evans…when he’s blond)

Now that said, the Stewart Realty series has become a bit of a sprawler.  That is to say the first 10 years between Floor Time and Closing Costs (the first 3 books) are truly only the beginning.  Because of that I have had to count on the eagle eye of various editing passes to find timeline blips and other issues.

END_OF_DOCUMENT_TOKEN_TO_BE_REPLACED 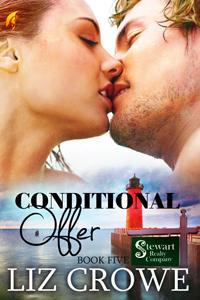 Conditional Offer is the fifth book in the Stewart Realty series by Liz Crowe. I was looking forward to this one in particular because I’ve always been a fan of Craig and wanted to know more of his story. And I was definitely not disappointed.

This series is one that you really need to read all of them in order – if you try to read them as standalones, you won’t have a clue what’s going on. I have read them all, however, so I already knew a little of the backstory between Craig Robinson and Suzanne Baxter. But reading the full story is a must, and I really enjoyed it.

Conditional Offer tells Craig’s tale, from his doomed relationship with Sara Thornton, to finding Suzanne and feeling there was something special about her from the very start. As with many other characters in the series, Craig and Suzanne end up falling into a very off and on relationship because they’re fighting their own demons and can’t seem to find a way to be together. Will they get over it and get their happy ending? You’ll have to read the book and find out.

Although I’m not a huge fan of books that jump around in timelines, i.e. six months later, etc, I did really enjoy Conditional Offer. I like the way that each book in this series shares strands with other ones, so each new book fills in another piece of the puzzle. I also find Liz Crowe’s writing to be very engaging, so I whizzed through this book in a couple of days. It’s hot, emotional, well-written and a page-turner. Another fab addition to the series.

Take it away, Liz…

END_OF_DOCUMENT_TOKEN_TO_BE_REPLACED 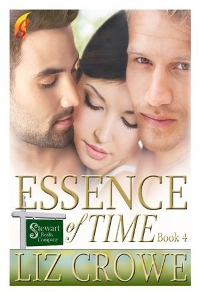 Essence of Time is part of Liz Crowe’s Stewart Realty series. This time, the storyline focusses on Rob and Blake – stepping back in time through their lives to find out why the men are the way they are, and following them through to present day.

Rob has avoided relationships all his life. Sure, he’s had plenty of sexual encounters, but he won’t approach anything resembling an emotional connection with anyone. Only Jack Gordon knows why, and Rob’s determined for it to stay that way. The last thing he wants is pity.

Everything changes for Rob when he meets Blake. Blake’s had troubles of his own, including a badly broken heart, and he’s not interested in being with someone new, either. But it seems the men can’t resist each other, and that their happy ending may be in sight. That is, until Rob’s big secret catches up with him and threatens everything they have, including the possibility of having a child together with a surrogate mother.

Essence of Time is a very long book, but that’s because it’s covering so much ground. There are several characters and story lines, all of which link together at the end, and the background is necessary for us to understand what’s happening now. And I have to say, I enjoyed every bit. The plot is forever twisting and turning, and is brilliant. There’s plenty of drama, emotional moments and hot sex, and the whole thing is excellently written. So if you’re happy to read a roller-coaster of a book with m/m sex and plenty of ménage, and also to have your heart-strings seriously pulled, then definitely check out this book.

Opening Night Eve at The Local, a deleted scene from Essence of Time

Rob’s head pounded. Sweat poured from every inch of his skin. His stomach roiled as he looked up from the glamorous task of re-bolting toilets to the floor in the women’s room just hard enough to connect his skull nicely with the damn container for…for…. “Shit!” He rubbed the rapidly forming knot and sat on the cold tile floor, letting the wrench and ratchet dangle from his shaking fingers. “This is insane. Utterly, completely totally insane.”

“Nah,” Jack’s voice floated in from where he was screwing the mirrors on the walls. “Well, maybe. But hey, I’m in it with you so it’s a guaranteed success.”

END_OF_DOCUMENT_TOKEN_TO_BE_REPLACED 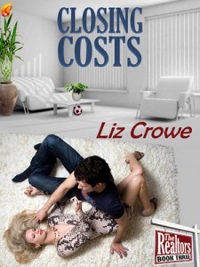 In this epic conclusion to Liz Crowe’s The Realtors series, things for Sara Thornton and Jack Gordon are both completely different and exactly the same. Their circumstances are wildly different, something they’ve both spent a great deal of time coming to terms with. Their feelings, however, remain the same, however much they try to deny it.

Despite their difficulty in getting used to the new things in their lives, they’ve actually been beneficial in terms of forcing the pair of them together and making them attempt to rebuild their relationship. They grow close as friends, which works for them… until one of them does something to screw it up and then they seem to move right back to square one.

Their on-again off-again status has them caught in a vicious circle, but with other people and responsibilities to consider, can they afford to keep messing around?

Although Closing Costs had a very satisfying conclusion, I felt it was a long time in coming. Book three had a lot of jumping ahead in time, which I found a little disconcerting at times – I’d just be engaging with a particular part of the storyline, then the next chapter would be talking about two years later. I can see why it had to be done that way, but I did find it a little jarring, which did dampen my enjoyment of the book somewhat. Having said that, though, the first two books made me invested enough in the characters to want to see it through to the end, and see what the future held for them. Overall, I thought it was really nicely tied up, for the secondary characters as well as Sara and Jack. I wasn’t particularly surprised by the ending, but there were enough twists and turns in the entirety of the three books to more than make up for it. These books were about the journey, more than the destination for me.

So if you’re looking for a well-written series about people with real problems and dilemmas, as well as tons of hot sex, then you should definitely check out The Realtors.