Music soothes Levon Blackfoot’s soul. He lives for the rush of the crowd and the high of performing, but something’s missing. The music he loves isn’t working. It’s time to make some changes.

Good thing it’s almost the New Year, the Haudeshaun. There’s no better a time to evaluate and pursue the woman he loves—Callie.

END_OF_DOCUMENT_TOKEN_TO_BE_REPLACED

A scared human plus a vampire with a secret. Things could be better, but they could be a lot worse.

Raine can’t remember time before the darkness. She’s a human in a paranormal world where humans are a commodity, not people, and she’s been abused by the vampires. When she ends up at the slave auction, she fears her nightmare will never end.

END_OF_DOCUMENT_TOKEN_TO_BE_REPLACED

Will this runaway royal ever find her place…and true love?

All Princess Catherine Zara of Lysianna wants to do is attend college like everyone else her age. So she’s a royal and requires a security guard to move about in public, but if she goes to university, she doesn’t have to marry the man chosen for her. He’s not her true love, so why torture herself? All she has to do to get her life started is to run away to the US…

END_OF_DOCUMENT_TOKEN_TO_BE_REPLACED

What if the woman he needs is the one he thought was out of his league?

Adam Pallas knows what he wants out of life—to teach history, to be happy and to have a hot woman by his side. He’s got one out of the three. He should be happy, but he’s not. There’s one woman who grabs his attention every time. The catch? She’s very much out of his league. Can being himself actually snag him the woman of his dreams?

Melissa Murphy isn’t looking for love, but every time she sees Adam her plans go sideways. The English teacher knows there’s a confident, hot man hiding behind the slightly nerdy history buff façade. But her past and the things she wants between the sheets tend to scare men off. She believes the odds may be stacked against them. Could it be their lives are perfectly written together after all?

END_OF_DOCUMENT_TOKEN_TO_BE_REPLACED 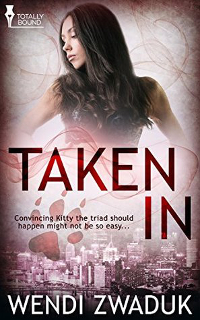 Taken In is an intriguing story about what happens when the supernaturals take over the world. They’ve forced the humans to serve them, and in short, it’s really not a safe time to be a human – except at a place called the Store Front, where a level of protection is afforded. It’s not ideal, as they’re forced to feed and have sex with the supernaturals – but it’s safer than going it alone in the outside world.

Kitty works at the Store Front, and has a pretty miserable existence. The only bright points in her life are when wolf shifter, Vic, and his best friend, vampire Gale, visit her. She loves being with them, and when she’s not, longs for the moment when they will come to her again.

The wolf and vampire adore Kitty, and want to take her away from the Store Front, but realise that convincing her they’re not just using her will be tough. But they’ve still got to try…

This was an enjoyable short paranormal tale, packed with action, romance and hot sex scenes. It was a unique take on a paranormal read, and one I’d recommend to fans of the genre. 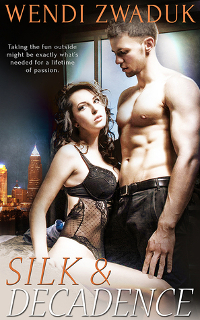 Silk and Decadence is the story of Sadie, a woman who enjoys spending time at her local dance and BDSM club. She’d enjoy it more, however, if she could get the attention of Master E, the man she’s been crushing on for a while. As the club dictates they must wear masks, being anonymous is simple, and in many cases, preferred. But when Sadie finally gets her wish to play with Master E, she’s both glad and disappointed that he doesn’t know who she is. Because Master E is actually Elias, Sadie’s boss at the bar/restaurant she works in. What will happen if Elias discovers the truth?