You are here: Home / Interviews / An Interview with Gretchen Bassier (@astheheroflies)

Here’s an author interview with Gretchen Bassier. Take it away, Gretchen…

Q: What’s your favourite published work of yours and why?

A: Probably a short story called “The Enemy,” just because I like the idea of a little kid successfully fighting monsters, both literally and metaphorically. That said, when it comes to my own writing, my favorites tend to be other people’s LEAST faves, and vice versa. No idea why that is!

Q: Where do you draw your inspiration from?

A: Everywhere! Dreams, conversations, real-life experiences, books, TV, movies, little “what if” scenarios that play out in my head. Especially the last one. I’m on the Autism Spectrum, so I spend a LOT of time in my head.

Q: Do you have any unusual writing rituals?

A: Not that I’m aware of, but I usually write alone, so who knows? If I ever sit down to write in a group setting, I’ll probably find out that I tap my foot every five seconds, or hum “It’s a Small World,” or do something else horribly annoying.

Q: Who is your favourite character from one of your stories and why?

A: I think it would be the main character from my middle grade novel, because he knows what he wants and doesn’t let any obstacles, physical or mental, stand in the way of achieving his goal. Also, he’s a superhero, so that’s pretty cool.

Q: What was your ideal career when you were a child?

A: I was 100% sure I wanted to be a veterinarian. No question whatsoever. My child self would be quite shocked that I turned out to be a writer. I did start writing a book when I was eight or nine years old, but never got any further than chapter three, most likely because even as a kid I recognized that the writing was NOT good. (The illustrations weren’t half-bad, though.)

Q: How do you get yourself in the mood to write?

Q: What’s the best writing tip you’ve ever been given?

A: Oooh, that’s a tough one! There are so, so many good tips (write what you know, show don’t tell, kill your darlings, be specific), but for me I think the best one is simply to write what you love. If you’re trying to follow a trend or write what you think others want to read, it’s just going to come across as forced. When you write something you truly love, the story that’s in your heart, then the readers will feel your passion.

Q: If you get writer’s block, how do you get around it?

A: I dunno if I actually get writer’s block per se, but once in a while I DO get stuck on a certain scene. If it gets bad and I’m really struggling without making any progress, I just skip that scene and move on to the next one. Eventually, I’ll come back to the part I skipped and fill it in. It’s kind of like taking a test. Only, without the pressure of the teacher sitting there, pursing her lips and checking her watch because everyone else has gone to lunch and you are literally the last one still working on the test. (I was not the best test-taker in school.)

Q: If you could bring one of your characters to life, which one would it be and why?

A: Lily from my story in Transformed, because she’s a werewolf and that would make werewolves real!

A: Sir Arthur Conan Doyle! I know I can’t actually meet him because of the whole “being dead” thing, but it would be cool. Not only did he write the Sherlock Holmes stories (which I LOVE) but he was a fascinating person. He was a doctor, he believed in the supernatural, he was constantly pursuing new experiences, and he knew Harry Houdini. I don’t think it would be possible NOT to have an interesting conversation with Doyle!

Q: What are you working on at the moment?

A: An adult sci-fi novel. It’s kind of like This Is Us, but with werewolves and set during a zombie apocalypse.

Q: What’s the biggest writing challenge you’ve ever taken on? Did you succeed?

A: NaNoWriMo. Yes, but it nearly killed me!

A: Finishing my first novel, because up until then I had never really stuck with anything, career-wise. I had all of these unrealistic fantasies about what I wanted to do–design t-shirts, perform acrobatics on horseback, train circus cats (I kid you not)–but none of them lasted very long. Writing that first book not only taught me how to finish what I started (even if it takes three years!), but also showed me that I love writing enough to do it for the rest of my life. 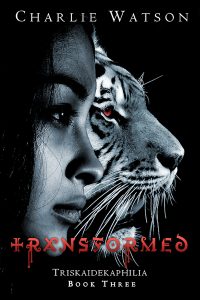 Nothing is quite so deliciously freeing as caving to your instincts. For centuries, shapeshifters have personified our impulse to bow to our animalistic nature. From lycans to skin-walkers and everything in between, shapeshifters give us a chance to connect with our inner-selves and celebrate our intriguing differences, our passions, and ultimately our humanity through their necessity of striking a balance between their human selves and supernatural selves.

About the Editor: Charlie Watson is a freelance editor ready to make her mark on the Edmonton writing community. Through her work with various writing and editing groups around YEG who deal exclusively with first time authors, Charlie is devoted to ensuring that fledgling authors have a wonderful experience publishing for the first time.

About the Series: Triskaidekaphilia is the love of the number thirteen. It’s also the name of our anthology series which explores the more shadowy corners of romance and erotica. There will be 13 volumes in total, each of which will be released on a Friday the 13th.

Eight months ago, while in a werewolf rage, Lily escaped her cage and killed an innocent person. Every moment since then, Lily’s guilt has grown heavier and more suffocating. Just as it threatens to engulf her, she meets a kind stranger who is struggling through his own emotional turmoil after losing his beloved wife.

Sitting in a coffee shop with Jack, Lily smiles for the first time in eight long, dark months. She and Jack love all the same things: Star Wars, banana bread, even cheesy eighties movies. In spite of her lingering guilt, Lily starts to fall for him. Jack makes it easy. He trusts her. He worries about her. He never compares her to his lost love. Jack makes Lily want to live again—and she does the same for him. 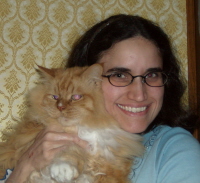 Gretchen Bassier is a 37-year-old with Asperger’s Syndrome who loves animals, superheroes, werewolves, awesome TV shows and books of every flavor. By night, she is a home health aide. By day, she cares for stray cats and writes short stories, novels and nonfiction. During the full moon, her neighbors may at times hear strange howling. For writing tips, reviews and links to Gretchen’s published stories, visit her blog: www.astheheroflies.wordpress.com.