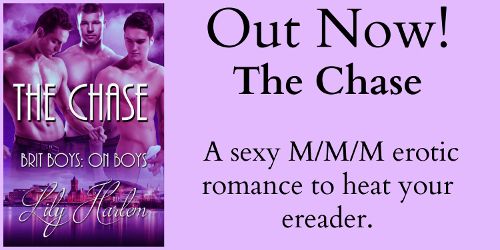 Previously published in Brit Boys: On Boys this sexy M/M/M story is set in Cardiff on a frosty night, but don’t worry, the temperature soon heats up as Stevie and Rob go on the chase for the third in their fantasy, Carrick, the funny man with a passion for dominance and a body that’s crying out to be worshipped. 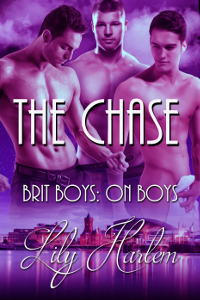 Steve’s killing time working in a comedy club. Why not? It makes him laugh and both the clientele and the comedians are not just fit but also great company.

“What are you doing?” Robert asked, walking in after them then looking around at the huge corner bath and the massive walk-in shower cubicle. “Fuck, it’s nice in here.”

“Yeah, and we can get it hot and steamy too. Warm this pretty boy of yours up.”

“Yeah.” Carrick smiled and reached for the base of Steve’s hoodie.

“What?” Carrick frowned and stilled.

“He’s my sub but I’m happy to share, tonight only.”

“And I get to say when he shoots his load, that’s my prerogative as his Master.”

“And if I’m not happy with anything you do to him, you stop, instantly.”

“He’ll love everything I’m going to do to him.”

“I think you might enjoy the things I want to do to you, too, Robert,” Carrick said quietly, releasing Steve’s hoodie. He stepped up close to Robert.

Robert’s face softened, his eyelids drooped. He still held Carrick’s wrist. “I’d be interested in discussing that.” His voice was low and sexy.

“You ever subbed?” Carrick asked.

“Nah, and not about to, but I don’t mind bottoming.”

“Good to know.” Carrick reached out and cupped Robert’s face. He drew their lips together in a slow but hungry kiss.

Steve watched, mesmerised by the sight of their tongues, glistening and pink, stroking in and out of each other’s mouths. He pressed his hand over his cock and willed himself to stay calm. But it was damn hard when he was watching the two Doms he lusted after connecting like that.

He hoped to hell they’d fuck later. He’d sell his soul to witness that.

“But we need him hot too.” He jerked his head at Steve. “We need to get him naked and in the shower to raise his core temperature.”

“Yep,” Robert said, releasing Carrick. He tugged off Steve’s hoodie and dropped it to the floor. He then peeled off his T-shirt and added that to the pile.

Steve stood still as Carrick undid his jeans and slid them down his legs. Robert stooped and pulled them off his feet, removing his soft shoes at the same time.

“Yeah, you said it,” Robert said, pulling the waistband out far enough to ease it over the end of Steve’s dick. It was as if he were presenting Steve’s long, slim cock to Carrick to feast his gaze upon.

Steve stared down at Carrick as Carrick stared at his groin.

Carrick’s cheeks were flushed and his lips damp where he’d just licked them. He appeared transfixed by what was in front of him.

“Oh fuck,” Steve murmured. A shiver went up his spine, rattled his teeth again and sent every hair on his body standing to attention. Damn, he hardly felt in control of his actions. He needed to get warm before anything could happen.

“Shit, even his dick is cold. It’s a wonder he’s hard,” Robert said, standing. “Come on, let’s do this.” He led Steve by his cock to the shower.

Carrick rushed forward to switch the faucet on.

The sound of water blasting around the cubicle filled Steve’s ears and he stood for a moment, watching the drips pound onto the glass and the tiles as Robert undressed.

“In you come,” Robert said, naked now and once again taking Steve by the cock and drawing him under the stream of hot water. He pulled him close, Steve’s back against his chest.

“Ah, yeah,” Steve said, raising his face to the heat and leaning his shoulders into Robert. “That’s it.”

“Yeah, let’s get blood flowing properly again, shall we?” Robert stroked Steve’s erection, long, slow, firm movements that wrenched at something deep in his belly.

“Are you joining us, Carrick?” Robert asked over Steve’s shoulder.

Steve opened his eyes and watched, through the glass, as Carrick let his robe fall to the floor in a crumple of white towelling.

He was coated with body hair, densest around the centre of his chest and groin, and his muscles were thick and defined and curved around his shoulders, chest and thighs. And his dick, it stood up at a right angle to his body, long and proud, the flesh a bruised shade of mauve.

Robert chuckled. “Ah, you like what you see, little one?”

Before turning her hand to writing Lily Harlem worked as a trauma nurse and her latest HarperCollins release, Confessions of a Naughty Night Nurse draws on her many experiences while nursing in London. Lily also self-publishes and The Silk Tie, The Glass Knot,  In Expert Hands and Scored have been blessed with many 5* reviews since their release.

Lily writes MF, MM and ménage a trois, her books regularly hit the #1 spot on Amazon Best Seller lists and Breathe You In was named a USA Today Reviewer’s Recommended Read of 2014. Her latest MM novel is Dark Warrior.

Lily also co-authors with Natalie Dae and publishes under the name Harlem Dae – check out the Sexy as Hell Box Set – The Novice, The Player and The Vixen – and That Filthy Book which has been hailed as a novel ‘every woman should read’.

One thing you can be sure of, whatever book you pick up by Ms Harlem, is it will be wildly romantic and down-and-dirty sexy. Enjoy!

Check out Lily’s website for details of her other books, join her newsletter list to be the first to hear of new releases and free reads, and if you enjoy Facebook, hop on over there and say hi!

Buy now on Amazon/ Amazon UK or read for FREE on Kindle Unlimited.