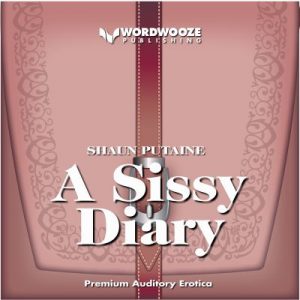 Scott is a closeted cross-dresser/wannabe submissive who gets “caught” when his wife comes home unexpectedly and finds him indulging his fetish in full costume, complete with his wife’s wig and makeup. This discovery isn’t well received and Carly storms out in anger.

Interestingly, the entire story is told through diary entries. This device facilitates the conveyance of Scott’s angst as he struggles to save his marriage by agreeing to a one-sided open marriage arrangement that allows his wife to indulge her need for sex with a better endowed lover, plus enduring “little girl” training at the hands of his brother and sister in law, who have some kinky secrets of their own. It is the latter scenario that makes up the bulk of A Sissy Diary. Ultimately his immersion in age-play allows Scott to realize his fondest fantasies in addition to restoring his wife’s trust in him.

Pavi Proczko’s narration is well executed and captures the characters without any hint of stereotyping. He handles the diary narrative deftly as well as the scenarios that spring from the diary entries. Both sissy fans and audiobook lovers will be pleased with his performance.