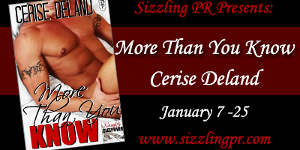 Heroes I want to lick! By Cerise DeLand (http://cerisedeland.com )

With a new book out almost every month in this New Year of 2013, I am really into men and heroes in a big, big way. I want to tell you what I really love about them and what you can tell about a man by the way he treats his woman.

I love them (and don’t you too?) in any shape or form, as long as they love to be loved and give it right back.

I like him strong, silent only when necessary (wink!), and giving.  This usually means he has/had a mother he loved for all the right reasons. It also means she taught him how to respect other women.  He also had a father or male role model that he found stable, introspective and mighty of mind and soul.

Men who are timid around the modern woman befuddle me.  After all, contemporary American women have been “liberated” for at least one generation. This means that the Flapper girl and Rosie the Riveter gave way to the Hippie chick and the Career Woman. The twentysomethings and thirtysomethings who are Sweet Things have a pair of youknowwhats on them that a modern man must deal with. For all the fathers out there who teach their sons to wash the dishes or run the vacuum aside from mowing the lawn, we women applaud them. And we want more, more, more!

So when it come to men in the bedroom with us (or on the kitchen table or on the floor), we really want to see their acquaintance with anatomy (for openers) and even the kama sutra. If they have a working knowledge of sex toys, I say, Yeah BABY. And if they want to try cuffs or chains, plugs or clamps, then we women will be all the better for it. They will, too!

For fun, I give you one of my latest heroes. He is Luke the Bartender in More than You Know. A man who has worked very hard at his “day job, Luke has just made it  big in an industry that is darn hard to break into. When he meets a woman who’s looks knock him flat, he has the guts to ask her to be with him. Not just once, but over and over again. Luke. A Man you want to meet!

“Hi, Luke Hurley.” His redhead stood right in front of him, beaming at him so the world glowed suddenly more brightly in this dark crowded room.

“Thish has got to be Rita. Right?” Teresa took a slow gander at the woman he had told her kept him awake at night.

“Rita Hayworth. You bet!” Teresa clamped a hand on his lady’s arm and peered at her like an X-ray machine. “Luke, you pegged her. That is who she looks like. Gee. Lucky you, huh?”

Rita questioned him with a sideways grin. “Luke, I—”

“Teresa is my friend,” he explained, trying to keep Rita here until he got her phone number and her real name.

“I’m his copyeditor!” Teresa put in. “His friend.”

“Yes, Teresa, and the lady would like to have her arm back.”

“Oh, don’t chu worry yourself none, Luke and Rita. I am leaving. I am!”

He turned back to his redhead. “I’m glad you came in tonight. I’ve been trying to find out your name. Went to the catering manager and asked about the wedding here tomorrow, but she says the mother of the groom is a platinum blonde and short.”

“She is,” Rita exclaimed, little chuckles escaping her.

Someone shouted out that he had to stop holding hands with the bombshell and take his order. Where was his assistant bartender? He looked around but tugged at Rita’s hand.

“Okay, okay!” Luke told him, but zeroed in on Rita. “I want to call you. Ask you to dinner or drinks. Coffee, anything. I need your phone number.”

“I’ll find a pencil and pad. And by the way, that gown is unbelievable.” He had to tame his voice so he could speak about the gold-sequined mermaid thing that made his cock twitch. “I think I just went blind. Don’t move.”

He strode toward the register, found what he needed and stepped toward her.

But her son and Blondie appeared beside her. Blondie was pouting. The son raked his hair.

“I’m sorry. Tamara,” Rita bit off the words, never looking at her future daughter-in-law as she took Luke’s pen and wrote on his paper. “But I am the one who brought up Josh. And I will sit in the first pew. If you or your parents don’t like it, too bad. And Josh, if your father or his new wife don’t like it, tough.”

Luke watched the family drama, realizing why he hadn’t been able to learn Rita’s name. She was the divorced wife of Mr. Silver-haired Banker. And judging from the close ages of stepmother and son, Rita might actually be wife numero dos.

The son cursed. “Tam, I want her to sit in the front pew. This is my mother, and she deserves to take precedence.”

Ouch. Luke couldn’t help but look at Rita, who locked her gaze on his and grinned.

Blondie stomped her foot. “I won’t do this to my daddy. He wants this to look good for his friends. You know how he is about marriages made in heaven and no divorce.”

“Well, Tam, next to golf, divorce is my father’s favorite pastime,” Josh retorted, as Blondie huffed and made a beeline toward the door. “Aw, hell. Mom, what can I do here?”

Before Rita could answer, he fled. To Luke’s dismay, Rita raised her hands in frustration, threw him an apologetic look and followed her son.

Luke pounded his fist on the bar and the pad of paper jumped with the blow. Numbers and words bounced around. He grabbed the sheet.

“Ricardo!” Luke called out to his assistant, as he ripped off his bar apron. “Take over here.” 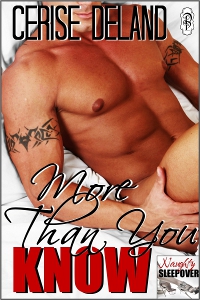 More than You Know–already out, from Decadent Publishing

When a va-va-voom redhead walks into Luke Hurley’s bar, he vows to get to know her. But she escapes him every time, her family besieging her. Luke wants to save her. Hell, he wants to savor her if he can only figure out how to intrigue her…and nail her. Luke has his hands full of the classiest, funniest female he’s ever met for one naughty night. But will she love him tomorrow?

And at the end of this month, get ready for a SEAL. 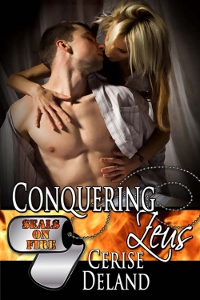 Getting in the party mood for a weekend away with his SEAL teammates is no easy deal for “Zeus” Calderon. He’s hung up on a woman he saved from terrorists months ago, but he should be able to forget a gutsy blonde reporter who showed resilience and humor under fire. Shouldn’t he?

Kim Stansfield got the instant hots for the hunky Navy SEAL who led her out of harm’s way—and she’s got proof Zeus feels the same about her. He’s stubborn, but she’s devised a plan to conquer him.

When she shows up in Key West and surprises him on the beach, Zeus learns that once in a lifetime a man meets a woman he can’t forget—and every day without her is no easy day.