You are here: Home / Guest Blogs / Relating to Characters – Sexuality and Similarity by Kate Hill

When writing a book, I’ve found that I relate to some characters very well and others I can’t relate to at all. Some characters share parts of my personality, even though it’s not always a deliberate decision to give them those traits.

In Blow by Blow, two characters share my point of view regarding love, attraction and being true to yourself. With one, the choice to do this was deliberate. With the other, I wasn’t fully aware at first that I had done this.

Liz is the single, middle-aged owner of A Panoramic View, the club where one of the heroes works part time as a waiter. She’s been around long enough to know exactly who she is. She realizes that she doesn’t need anyone’s approval regarding her personal life. The only opinions that matter belong to the people who love and respect her. She has learned that you can’t please everyone and unfortunately some people judge others without really knowing them.

In one scene she says,

“Being how I am, I’ve had to deal with that kind of shit all my life. If you’re bi, some people are under the impression you have to make a choice. If you’re pan, people say it’s not a ‘real’ sexuality, like I haven’t known all my life that I was attracted to people for who they are, not for what’s between their legs. At forty years old, I’d better know what the hell I am, but there are still people out there who don’t accept it.”

Like Liz, I’ve been there and done that. I’m sure many other people have as well.

In Blow by Blow, Liz is my eyes and ears within the story. As a secondary character, she observes everything and she is privy to other characters’ secrets.

In her personal life, Liz doesn’t pay much attention to sex or gender. She admires beautiful men and handsome women as well as the reverse. In this way, she’s like me, but she’s also like Valentin. Looking back, this should have been obvious, but at first I didn’t realize it.

Valentin is instantly attracted to Theo, although at first glance from across the dojo, he thinks he’s a “cut, amazingly sexy woman.” He quickly realizes his mistake, but he is just as aroused when he discovers Theo is a man. For him, attraction isn’t based on male or female. What’s important is Theo has a certain something that Valentin finds irresistible. 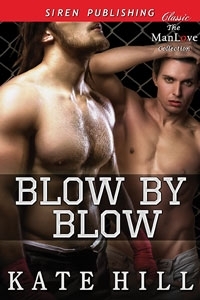 A hunky former heavyweight champ and an ass-kicking beauty fight for their lives and their love in a futuristic world of MMA.

Theo “Little Raven” Fisker, is a bantamweight with attitude who plans to make a name for himself in the Radical Warrior Tournament, a prestigious mixed martial arts event. The problem is no team will sign a male fighter who walks out in silver and pink with nail polish to match, until he meets Master Jesse.

Impressed by Theo’s talent, Jesse welcomes him onto his up and coming team. Fists and sparks fly when Theo meets gorgeous Valentin Merrickson. Theo draws Valentin out of his protective armor and sparks hope for a life the tough heavyweight never imagined possible. Their love grows, but threats from extremists and an injury that ends Valentin’s career in the cage might tear them apart.

The following excerpt from Blow by Blow is for readers 18 and over.

“Oh wow. Where did these come from,” Theo said, squatting by the pot. He let go of his bags and reached for the attached florist’s card. He read it, smiled, rose, and slipped his arms around Valentin’s neck. “Thank you.”

Valentin hugged him back a bit awkwardly since grocery bags filled his hands. “Didn’t know what else to give you as a welcome gift.”

“Kinda figured when you ate half my supply during breakfast yesterday morning.”

Theo stepped back, his hands still cupping Valentin’s neck. “Are you saying I’m a blueberry hog? Don’t answer that. Come on.” Theo opened the door, picked up his grocery bags, and stepped inside, Valentin close behind him.

They were quite hungry, so after putting away Theo’s shopping, they sat down to lunch. When they finished, Theo did some quick housecleaning, not that he had much to do. The house was impeccable. Debra and her parents obviously took a lot of pride in their property. Valentin volunteered to help. While Valentin tidied up the lunch mess and opened the windows in the house to let in the fresh spring air, Theo cleaned the bathroom and unpacked his belongings.

“I know this hasn’t been much of a date so far,” Theo said.

He and Valentin stood in the bedroom where Theo was about to put the new sheets he’d bought on the bed.

“Fine with me,” Valentin said, helping Theo tuck in the fitted sheet. They both reached for the top sheet at the same time and Valentin closed his hand over Theo’s. He tugged Theo closer.

Even with the thick heels on his boots, Theo still had to tilt his face up to meet Valentin’s gaze. Valentin dipped his head toward Theo to cover his mouth with a kiss.

Closing his eyes, Theo surrendered. He pressed even closer to Valentin.

Valentin thrust his tongue into Theo’s mouth and Theo opened to him. Their tongues lashed and thrust. They explored each other with all the passion they’d felt since the moment they’d met.

When the kiss broke, they were both a little breathless.

“Let’s hurry up and get this bed made,” Theo said.

While Theo put on the top sheet, Valentin tugged the cases onto the pillows. No sooner had he tossed the last pillow on the bed than Theo gasped his waist and stepped so close that their stiffening cocks pressed against each other. For the first time Theo initiated their kiss. He gently bit Valentin’s lower lip and sucked on it, making the bigger man groan.

Theo slid his tongue between Valentin’s lips and deepened the kiss. Valentin’s beard scraped Theo’s face, but he loved the sensation. Valentin grasped Theo’s ass. He squeezed and kneaded it and Theo’s cock stiffened even more.

Since meeting Valentin, he’d dreamed about this, but hadn’t wanted to move too fast. He didn’t need more complications in his life, but Valentin was irresistible.

Theo reached between them and rubbed a hand over the bulge in the front of Valentin’s jeans. Then he unzipped him. Valentin didn’t wear underpants, so his cock tumbled into Theo’s hand. It was thick, warm, and velvety. Theo squeezed and stroked it. He ran his thumb along the underside, and then he swept it over the bulging head.

“Oh, babe,” Valentin said in a rough whisper close to Theo’s ear. His warm breath teased him. Valentin swirled his tongue around the shell of Theo’s ear.

Valentin stepped back only to kick off his sneakers and tug off his jeans.

Theo pulled off his shirt and tossed it aside, baring his lean torso to Valentin.

Valentin’s blue gaze swept Theo’s chiseled chest and abs. The smoldering look in his eyes made Theo’s cock even harder. He pulled down his tights, turning so that when he bent to remove them, Valentin got a clear view of his bare ass.

Valentin grasped his ass and squeezed.

“Ah!” Theo laughed and jumped up.

Valentin caught him and held him close to his broad chest. He still wore his T-shirt and Theo longed to feel skin against skin.

“You have a gorgeous ass,” Valentin said, nuzzling Theo’s neck and caressing his bottom.

“Take your shirt off,” Theo said. He turned in Valentin’s arms and tugged up his shirt. Valentin stepped back slightly, pulled it off, and dropped it on the floor.

Moaning softly, he caressed Valentin’s chest with both hands. Valentin was so fucking huge and handsome.

Valentin picked Theo up over his shoulder, carried him to the bed, tossed him on it, and then he stretched out beside him. Leaning closer, he braced a hand on either side of Theo’s head and kissed him.

Gazing into Theo’s eyes, he asked, “What do you want?”

“You.” Theo grinned, locked his arms around Valentin’s neck, and brushed his nose against the bigger man’s.

“Yeah, but how? What do you like? I mean, I know I’d like your tight little ass.”

“I don’t know if I’m quite ready for that yet.”

“I kinda had that feeling. All I mean is I’d like to explore a little before we–”

“Hey, whatever you want.” Valentin kissed him tenderly. “So what do you want?”

When she’s not working on her books, Kate enjoys reading, working out and spending time with her family and pets. Kate also writes under the pen name Saloni Quinby. She enjoys hearing from readers and she can be contacted at katehill@sprintmail.com. Visit her online at http://www.kate-hill.com.