An angry, dead spirit is useless – until it becomes the living Haint in your bed!

JD Tolliver begins research for his thesis on paranormal phenomena as a nonbeliever. He believes now. A ghost or angry spirit, a true haint, follows JD from Appalachia. His finding a suitable body so he can leave poses a problem — $it has JD by the balls@!

Coll Collins spent over a hundred years locked in silence. Suddenly freed, he discovers that gay hate crimes are not a thing of the past. The stranger he attaches himself to is sassy and, to Coll, sexy as hell. Never had the pleasure of a soft young man, and Coll plans to take advantage every single night until he returns home. 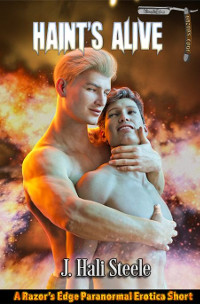 Dropping his bag by the door, JD headed straight to the kitchen for a glass of milk. Bringing the glass with him, he collected his suitcase and pulled it to his bedroom. Couldn’t wait to check out a few scavenged treasures from his trip to the Appalachian area on the border of Tennessee and Virginia. He’d thought the area would be a good place to begin research for his thesis on paranormal phenomena.

Wished his father understood JD’s interest in experimental psychology. Heck, considering he couldn’t get the man to call him anything aside from James David, as if JD left some sort of unsavory tag on the Tolliver name, seemed highly unlikely the old man would ever change his mind about JD’s interests.

Opening his carryon, JD retrieved an item he hadn’t dared leave to baggage handlers. Discovered it in a dusty, trash strewn corner of a soon-to-be demolished old mansion in Laurel Bloomery, Tennessee. The small cube-shaped box smelled of cedar, and JD had kept it safely on his person the remainder of his trip. It resided in a bag on his lap during the flight. Risky, considering he discovered every time the box was close he got a raging hard-on. Not a prude by a long shot, but his bookish looks led men to believe he was… well… virginal.

He couldn’t stop. Shoved his hand inside pants, used pre-cum to facilitate jerking off. Sound of wet hand against skin sliding back and forth over his crown darn near had him coming full force in his pants.

His phone vibrating in his jacket pocket created a colossal mess. Jumping, JD knocked into the glass on his nightstand, sending milk everywhere and his precious box sailed through the air. “No!” When it hit the floor and broke, JD strangled on air caught in his throat as he glimpsed a shiny object roll beneath his chest of drawers. Thick, white smoke billowed into the room. Smelling like cedar, it swirled and swirled before floating over to envelop him. JD swore it was an attempt to molest his body. “Oh Lord!”

A gruff voice murmured, “Thank you for freeing me.” 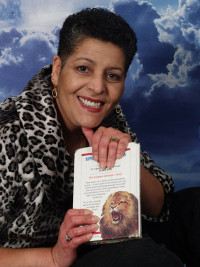 Multi-published and Amazon bestselling author of Romance in Paranormal, Fantasy, and Contemporary worlds which include ReligErotica and LGBTQ stories where humans, vampyres, shapeshifters and angels collide-they collide a lot! When J. Hali’s not writing or reading, she can be found snuggled in front of the TV with a cat in her lap, and a cup of coffee.

Growl and roar — it’s okay to let the beast out. — J. Hali Steele