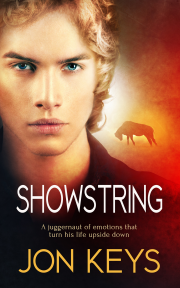 Beef and beefcake, tight Wranglers and a lifetime of anguish, cattle and competition. Can Jayden and Ben mesh their wildly different backgrounds?

Jayden Laine has spent his life in the city, dreaming of cowboys and cattle ranches. He looks forward to each fall when his real life is exchanged for his dreams at the state fair.

This year, as he steps into the barns, he’s greeted by everything he’s come to see, along with the additional sight of Ben Ramos fighting to move a two-thousand-pound bull that’s decided he doesn’t want to cooperate. What happens next starts a juggernaut of emotions in Jayden that turn his world upside down. Now all he has to do is reevaluate his entire life and decide who to believe. And he has only a few days to do it.

Publisher’s Note: This book has previously been released elsewhere. It has been revised and re-edited for re-release with Pride Publishing.