Nicholas and Alex know one thing for sure: they want to spend their lives together, and now that they’re engaged, they can start planning their big day to make that happen. The only hitch? Both of them have very different ideas on what that means.

Nicholas has been all about a grand wedding since he was a teen, carefully planning every detail from floral arrangements to the perfect cake. He has big dreams and a bigger budget to make it happen. But Alex? Despite finding the love of his life, he’s still a little jaded, and he’d rather elope at the local courthouse, keeping the start of their married life low-key.

Can they set aside their different ideas on their big wedding and compromise to make it the wedding of their dreams, or will a major tragedy be the final blow after they struggle to see eye-to-eye? 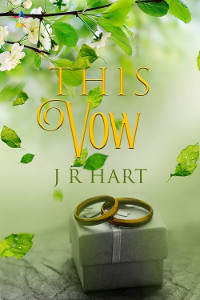 “Nicholas, there’s a fire, in the kitchen! We have to go!”

Bleary-eyed from sleep, Nicholas didn’t grasp what Alex was saying. “Fire?” He didn’t comprehend the box of recipes in his hand, why Alex was shoving them at him frantically. Drowsiness from cold medication and the deep sleepfulness of his nap didn’t help matters, a slur of loud, blaring alarms sounding in his mind as he tried to pay attention to what Alex was telling him.

“In the kitchen! We have to get out of here, Nicholas. Carry the recipes! Let’s go!” Alex insisted.

Fire? His brain repeated the word. Fire. Fire! Oh gosh. He glanced around him, trying to take stock of what they might be able to save. “Okay, um…” They had to get their things, important memories and items from around the apartment. Why was Alex in the bedroom instead of grabbing their photos off the walls and the box of notes they’d written each other early in their relationship out of the closet?

“Nicholas, we don’t have time to get stuff. It’s spreading too fast. We have to go.” Nicholas followed Alex’s eyeline up to the smoke entering the bedroom, watching as he raced toward the living room, and the urgency finally started to click into place. A fire. An actual fire. Not the hypothetical “what three items would you save in a fire?” kind of situation, but a real-life, honest-to-God fire. “Oh no.” Stumbling out of the bedroom and closing the door out of habit, he could see the flames now, the bright-orange flickers of light in the kitchen. He started toward the source of it, the location of most of his prized possessions, but Alex yanked him back by the arm.

“Crawl!” Alex urged him. “We have to crawl over there.” Alex ducked down, tugging his shirt up to cover his mouth and nose. Nicholas followed suit, grasping the recipe box and moving ahead, trying to get to the door and open it while Alex scanned the room. Halfway there, the half wall dividing the kitchen from the entryway shook with a loud bang. Something in the kitchen exploded. “Oh my God!” Alex yelped.

“What was that?” Nicholas assumed the explosion came from some pressurized can like cooking spray, or the bottle of their favorite whiskey they enjoyed on poker nights with the girls. His brain lagged behind the urgency of the situation, focused on the things being consumed by the fire creeping closer.

“I don’t know!” Alex’s words jarred him back into the moment. “Let’s go to the balcony,” he pleaded. The fire escape there hadn’t worked in years, but Nicholas agreed that outside, regardless of a way down, was the safer bet. If anything, they could breathe fresh air out there instead of toxic smoke in their apartment.

Alex crawled in the other direction and Nicholas followed, watching Alex slide the glass door open and let him through. Both of them stood and closed the door to seal the blaze behind them. “Now what?”

If the fire got any closer, Nicholas figured the heat could shatter the glass. Was it the movie Backdraft that happened in? He didn’t know why his mind focused on Hollywood hypotheticals instead of on the reality of what was happening to his home, his life. Maybe because his brain was on a delay, hadn’t fully registered the intensity of the situation.

Alex pushed their mostly dead succulents in front of the door and nestled Nicholas against the railing of the balcony that didn’t line up with the glass, putting them out of harm’s way. He must have been thinking the same thing about the glass shattering. “Call 9-1-1,” Nicholas told Alex. Drilled into his head from countless school fire safety classes, he didn’t have to even think. But then the reality of what was happening hit him all over again. A lot of their beloved belongings continued to burn. Maybe they had time… “We forgot—”

“Nicholas, we can’t go back in,” Alex reminded him. “Whatever we’ve forgotten, it’s not important.”

Right. Good enough. Getting out alive had to be good enough. Nicholas nodded, tearing up as Alex pulled his phone out of his pocket.

“What are you doing?”

“Telling Jade to pull the building fire alarm,” he said. Their own smoke alarm only sounded in their apartment, barely loud enough for the neighboring apartments to hear. This was a good thing when the alarm sounded for minor problems, like grease popping around eggs, but not a great feature when it came to a real fire. Then, Alex’s voice switched to no-nonsense mode as he called 9-1-1, waiting till he was connected and then explaining the fire to the dispatcher.

Nicholas could hear the fire alarms blaring clearly now. Jade must have done as he asked. From the balcony, Nicholas saw the edges of the flames licking at the picture they’d hung on the wall after their engagement. He turned away. He couldn’t bear to look at the fire taking away everything they owned, every precious memory they’d shared in the apartment. Looking down at the ground, he spotted people filtering out of the front doors of the building, staring up to them on the balcony above. “What the heck happened?”

“I was trying to make you soup,” Alex admitted, followed by, “I’m so sorry.”

The guilt in his voice was palpable, breaking Nicholas’s heart. “Baby, it’s all right.” As the trucks backed up, ladders extending, Alex cried against him, his free arm around him. Alex sobbed harder than Nicholas had ever seen him cry.

“I’m so sorry,” he repeated and then he turned toward the ladder, heading down with Nicholas climbing after him, cradling the recipes in his arm. He listened to the sound of the crackle through the sliding glass door as the contents of their lives went up in smoke.