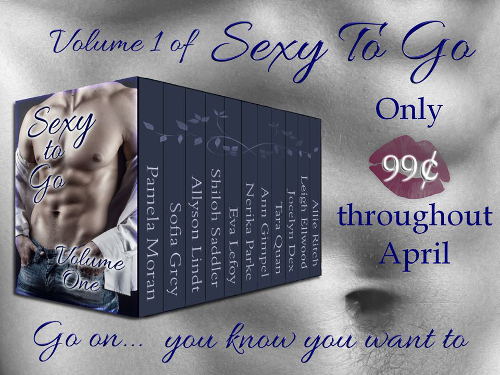 Sample romance in all its flavors in Sexy to Go. From paranormal to contemporary, you’ll find your fix here. Look for a brand new collection every month.

Punishing the Messenger by Tara Quan

When her flighty cousin bails hours before the wedding, Kailee Chan is forced to deliver the news. The dominant groom punishes her instead, and her submission leads to a far more serious commitment.

Tara Quan writes romances with a smidgen of kink. Inspired by her travels, she enjoys tossing her kick-ass heroines into exotic locales, paranormal worlds, & post-apocalyptic futures.

Casi suffers a scheduling mishap, but finds impromptu sex in the forest fulfills more than one personal fantasy. When the sexy shifters vanish, she’s left with an invitation to return. Does she dare?

Eva Lefoy writes and reads all kinds of romance, and is a certified Trekkie. She’s also terribly addicted to chocolate, tea, and hiking. One of these days, she’ll figure out the meaning of life, quit her job, and go travel the galaxy. Until then, she’s writing down all her dirty thoughts for the sake of future explorers.

To Love Again by Allie Ritch

Kara is a reincarnated sorceress who has cheated death to return to her vampire lover again and again. She always comes back to Griffin. And she always leaves him, too. Now the anniversary of her first death has arrived, and she’s fated to die. Will she finally let Griffin turn her so they can be together forever? Or will she love him again in the next life?

Allie Ritch is a multi-published author of sizzling sci¬fi and paranormal romance. She has an active imagination and enjoys entertaining others through storytelling. Allie lives in her own little world in the Southeastern United States, where she spends time appreciating the ocean and sunshine.

Faking It by Sofia Grey

Lucy can’t believe her luck. Upgrade to 1st class flight and a hot hunk in the next seat. He’d never be interested in a geek, so maybe it’s time to reinvent herself? Faking it has never been such fun.

I’m a 40-on-the-outside / 20-on-the-inside girl with a passion for the simple things in life. As long as they include wine, chocolate and rock music, I’m good. When I’m not either herding project managers (at work), cats (at home) or cub scouts (in what passes for spare time…) I’m curled up with my Kindle or my laptop. To me, writing is as addictive as reading and I can’t manage unless I have both.

Jocelyn was born in Iowa and currently resides in hot-as-hell Texas. She shares her home with her very own 6’4? alpha male and varying numbers of spoiled cats and dogs. Teaching one of her dogs to file his nails is one of her all-time favorite accomplishments.

She thinks dragonflies are awesome, spiders are creepy and it’s rumored that she sleeps with a machete by her bed in case zombies attack in the middle of the night.

If Jade can’t learn to balance business and pleasure, she’ll lose the best thing that’s ever happened to her—the unconventional spark she shares with her boyfriend, Brandon

Allyson Lindt is a full-time geek and a fuller-time contemporary romance author. She prefers that her geeky heroes come with the alpha expansion pack and adores a heroine who can hold her own in a boardroom. She loves a sexy happily-ever-after and helping deserving cubicle dwellers find their futures together.

Dancing in the Flame by Ann Gimpel

Keira’s an indentured hooker. Mired in the hopelessness of her dreams, she longs for more and finds it in Barrett. He’s not what he seems, but neither is she—except she doesn’t know it yet.

Ann Gimpel is a national bestselling author. She’s also a clinical psychologist, with a Jungian bent. Avocations include mountaineering, skiing, wilderness photography and, of course, writing. A lifelong aficionado of the unusual, she began writing speculative fiction a few years ago. Since then her short fiction has appeared in a number of webzines and anthologies. Her longer books run the gamut from urban fantasy to paranormal romance. She’s published over 25 books to date, with several more contracted for 2015 and beyond. A husband, grown children, grandchildren and three wolf hybrids round out her family.

Skin – One needs a tough skin to endure an unpleasant situation. When Lt. Andromeda Kurn is sentenced for damaging property during a shore leave, the skin suit she must wear enhances the pleasure of her punishment.

Meant to Be by Nerika Parke

A rock concert, a chance meeting with a sexy musician and a night on the beach turn Jessica’s unremarkable life upside down when she takes a weekend away for her birthday.

When UK born Nerika Parke decided to turn her writing hobby into something more serious, it came as a bit of a surprise to her that she seemed to be a natural romance writer, because her favourite TV shows usually involve zombies and spaceships (although not necessarily together). Having learned to embrace her soft, gooey side, she now spends all the time she can writing intensely romantic stories about ordinary people (and sometimes ordinary ghosts) who find extraordinary love.

Pulled together through a world of dreams, Lena and Davis might have found the Key to Paradise. Can he convince her to take a chance, to believe in impossible possibilities, to hold on to their dream?

Whether painting, out on a photo shoot or writing, Pam has always had a bend toward the creative side of life. Her favorite is when she can combine any of those with travel. Places get into her blood and she loves to explore the possibilities, always with characters and a story in mind.

An astrologer for most of her adult life, Pam has been known to see auras & the occasional ghost. Considering she lives in a haunted house in the mountains of southern California, this keeps life interesting.

For His Pleasure by Shiloh Saddler

A black slave and white plantation owner’s son narrowly avoid being separated when the estate is sold. Forced into poverty they must work hard to survive. But through the hardship their love endures.

Shiloh Saddler is primarily a GLBT romance author and historical is her favorite genre. She likes to do research for her steamy romances first hand. She has invented a time machine and travels back to the 19th century on a regular basis. There are experimental settings on her time machine which could propel her into the future and even other worlds. She believes love and a good book makes anything possible. 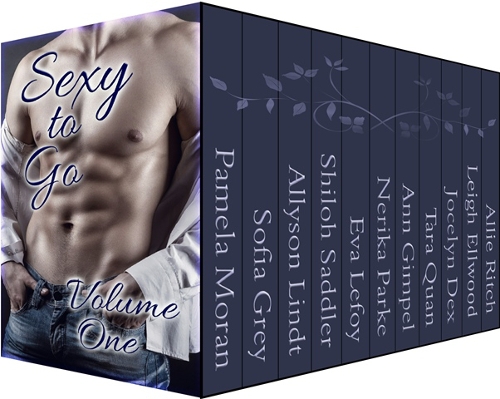