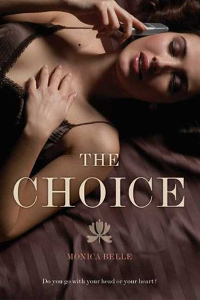 The Choice by Monica Belle is based in Oxford, England, and its prestigious university. It tells the story of Poppy Miller, a promising and ambitious student who’s looking to get into the world of politics – in spectacular style.

From day one her choices are carefully made – who she’s friends with, who she dates and so on… she doesn’t want any scandals to come back and haunt her in the future when she’s launched her career in politics.

Poppy feels she’s made a good choice in Stephen Mitchell, a second-year student. They begin a relationship that’s fun and sex-filled, and Poppy’s quite content with the way things are. That is, until she officially meets her neighbour, Violet’s, partner, Dr James McLean. There’s something about him that she’s drawn to – and the more time she spends with Violet, the more she realises hers and McLean’s sexual relationship is far from vanilla.

Her curiosity is well and truly piqued, and she tries to persuade Stephen to get a little more inventive in the bedroom, but he’s not quite hitting the spot. A shocking discovery about Stephen throws Poppy well and truly off track, and when she starts exploring her darker fantasies, she’s not sure she can go back to how things were. But when her new liaisons threaten her future in politics, what will she do?

This was an intriguing read. It was a little slow to start, which almost caused me to lose interest, but fortunately it quickly picked up. Before long I was flicking pages to see what secrets and sexual shenanigans would take place next. Although there were relationships within the book, I would still say this book leans more towards erotica than erotic romance, as the focus was far more on the sex than on any emotions or relationships. I’m not saying this is a bad thing, but if someone is looking for a love story to make them swoon, this isn’t it.

Available from:
Amazon UK
Amazon US
All Romance eBooks
The Book Depository
Waterstones