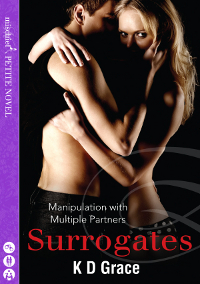 Surrogates is a new novella from K D Grace, published by Mischief. In typical K D Grace style, it contains gardens, vegetables and lots of hot and truly filthy sex. In fact, you may never look at a courgette in the same way again.

Surrogates is the story of Daniel Alexander III. He’s in love with his gardener, Francie Carter, but until he plucks up the courage to ask his wife for a divorce, he won’t do anything about it. He and Francie simply wank together – because as they’re not touching, Dan doesn’t class it as cheating. The trouble is, though Dan’s getting some – albeit dull and unsatisfying sex – from his wife, Bel, Francie isn’t getting any, and Dan’s worried that her sexual dissatisfaction will make her leave.

Dan then comes up with the idea to let his friend, Simon Paris, be his “surrogate.” Simon will have sex with Francie while Dan watches and supervises – and wanks, of course. That way, everybody is happy. Or at least that’s the way Dan sees it.

Meanwhile, Dan’s wife, Isabel, is also exploring borderline fidelity with her massage therapist, Ellen. Bel believes that because she’s sleeping with a woman, it’s not “proper sex” and therefore, not cheating.

In a strange twist of fate, Dan’s discovery of Ellen and Bel’s relationship rekindles his passion for his wife. As a result, their sex life improves massively. At the same time, Francie and Simon’s passion grows, and Dan thinks he has the best of both worlds. But pride comes before a fall, and soon, the seedy secrets and lies start to unravel. When the dust settles, it’s interesting to see how the land lies.

I read all of this novella in public, and was constantly checking over my shoulder to make sure no one could see my Kindle screen – they’d have been shocked. Surrogates is seriously naughty – as you’d expect from this particular author – and I did wonder where things were going as the story continued. I was also pleasantly surprised by the twist in the tale.