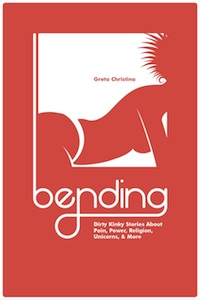 Also, I’m a feminist. An ardent one at that.

So what’s that about? And how do I reconcile it? Is there even anything to reconcile?

And as feminism slowly and painfully grinds forward, and as women get more power, more agency, more responsibility, we’re going to fantasize more about being overpowered, controlled, and helpless.

Now, when it comes to men, people seem to get this. To the degree that they get anything at all about kink, that is. The cliché of the rich and powerful business executive paying a high-priced dominatrix to tie him up and torment him… well, it’s a cliché. A trope, even. It’s titillating, it’s outré, it’s even shocking — but it’s not really surprising. To the degree that people understand and accept kink at all, they understand that a powerful person who makes decisions all day might want a respite from that, might want to hand over the reins and let someone else be the decider. In pure fantasy, or in a temporary acting-out of fantasy.

Which brings me back to the feminism.

But when I started looking over the stories I was putting into “Bending,” I noticed a pattern. In almost all the stories, a woman is the instigator of the action. In almost all the stories, a woman is the one who initially has the sexual desire… and a women is the one who engineers the satisfaction of that desire. There are a few fantasies where a woman is a true “victim” of the bad bad things being done to her — that’s a hot fantasy, and I’m fine with that — but they’re in the minority. Most of these stories start with a woman thinking about what she wants, and communicating what she wants — verbally or otherwise — and taking action to make what she wants happen. And most of the stories are told from a woman’s point of view. It’s her experiences you’re reading about: her feelings, her desires, her thoughts, her sensations, how this sex fits into her life, how this sex is going to change her life. In most of these stories, women aren’t the objects of desire — they’re the subjects.

So ultimately, as a feminist, I am fine with this. In fact, I am much more than fine. I am actively positive.

It’s not as if coming out about being kinky, or even having kinky fantasies, is totally accepted and mainstream. Sure, it’s slightly more so now since 50 Shades came out. But still. Whenever I hear this line about how female masochism is just giving our sexist culture what it wants from women, I always want to ask, “What on earth makes you think that society is applauding women for being sexual masochists? What planet are you living on? And can I live there, please?” Coming out about having kinky desires is still an act of defiance. And women coming out about having sexual desires at all is still an act of resistance.

And I hope that I’m providing it.