Such a funny celebration, at least here in the U.S. I understand it’s not so crazy in the UK.

But in the states, it gets ridiculous. For those who don’t have a love-interest, the day is a sorrowful reminder of that ugly fact. I’ve been that person – watching all the girls waltzing about with tributes from their admirers. For singles, the day sucks.

For those who *do* have a love-interest, especially a long-term one, it’s kind of a meh event. Why choose just one day to show love, especially when the candy is stale from being stocked for months and the roses cost three times the amount? Cynical, yes – but also true.

For me this year, I’m flying to Dallas on Valentine’s evening, to attend the Adventures in Fiction mass-author signing. (http://adventures.freshfiction.com/) Because, THIS is what the real romance-lovers do, right? Screw real life, GIVE US THE BOOKS!

In many ways, the stories give us the same sparkly buzz that the idea of Valentine’s Day does. It’s the ride, the fantasy, the sweet slide into delicious sexy times. That’s what I wanted to play with in my new serial novel, Master of the Opera. It’s a modern retelling of The Phantom of the Opera, set in the U.S., in my hometown of Santa Fe, New Mexico, at the famous opera house here. 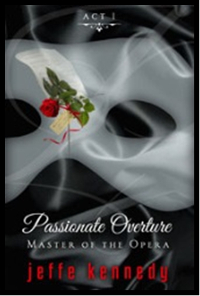 In the first tantalizing installment of Jeffe Kennedy’s ravishing serial novel Master of the Opera, an innocent young woman is initiated into a sensual world of music, mystery, passion–and one man’s private obsession. . .

Fresh out of college, Christine Davis is thrilled to begin a summer internship at the prestigious Santé Fe Opera House. But on her first day, she discovers that her dream job has a dark side. Beneath the theater, a sprawling maze of passageways are rumored to be haunted. Ghostly music echoes through the halls at night. And Christy’s predecessor has mysteriously disappeared. Luckily, Christy finds a friend and admirer in Roman Sanclaro, the theater’s wealthy and handsome patron. He convinces her there’s nothing to fear–until she hears the phantom’s voice for herself. Echoing in the labyrinths. Singing of a lost love. Whispering her name: Christine.

At first, Christy thinks she’s hearing things. But when a tall masked man steps out of the shadows–and into her arms–she knows he’s not a phantom of her imagination. He is the master of her desire. . . 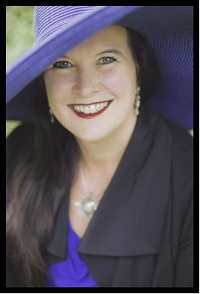 She is currently working on Master of the Opera and The Twelve Kingdoms, a fantasy trilogy.

Jeffe lives in Santa Fe, with two Maine coon cats, a border collie, plentiful free-range lizards and a Doctor of Oriental Medicine. Jeffe can be found online at her website: JeffeKennedy.com or every Sunday at the popular Word Whores blog.