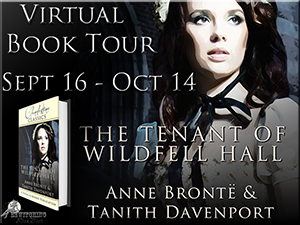 The process of rewriting a classic

When I decided to take on The Tenant of Wildfell Hall, I knew it would be a challenge – and it was, in so many ways.

Before I could even begin writing, I needed to re-read the book – no great hardship as it’s always been one of my favourites – and plan out spots where intimate moments could be inserted, paying attention to the surroundings in each instance. There are a number of places where private conversations are held between lovers and illicit kisses are stolen, but more intense encounters might prove to be unfeasible; a kiss in a corridor, for instance, became a passionate fumble in an alcove, but even for that to happen I had to get rid of a loitering father and an eagle-eyed mother. Other times my heroine worries about being caught by the servants. It all needed to be considered.

As the novel is written from two different POVs, I also needed to make sure I kept to the correct voice and stayed true to each character. This was particularly daunting. I rarely write male POVs and never write in the first person. However, it was much easier than I expected, possibly because Anne Bronte’s writing style seemed to easily mesh with mine. Helen’s passionate mode of speech flowed very naturally and her gradually more uninhibited responses to her husband were surprisingly simple to describe.

Some terminology we use today would also work in a classic novel. “Cock” and “arse”, for instance. Others, to me, seemed less appropriate. I preferred using “quim” and “cunny” over words like “pussy”, which struck a false chord in my head somehow. And did they say “come”? In the end, I allowed it, although sparingly, and never used it as a noun – I simply couldn’t picture Helen Graham bemoaning the come stains on her undergarments. It was difficult enough to have her saying “cock” – I had to have her stumbling on her words sometimes, just to demonstrate her extreme sexual innocence.

I’m proud of having completed The Tenant of Wildfell Hall, and thrilled to see it finally published. I just hope I managed to do it justice! 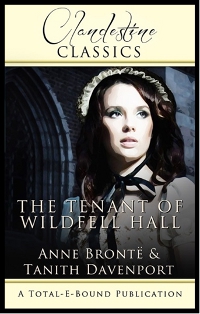 Into the quiet village of Lindenhope comes Helen Graham, an attractive young widow and mother. Living alone with her son at Wildfell Hall, her seclusion attracts curiosity from the local people, in particular Gilbert Markham, whose interest in her is soon edged with desire—and Helen, despite herself, begins to reciprocate his love for her.

But when scandalous rumours begin to circulate about Helen’s behaviour, Gilbert is filled with anger and jealousy. Helen attempts to clear her name by offering Gilbert her diary, which reveals the dark, passionate story of her former marriage to debauched rake Arthur Huntingdon, whose sexual and sensual desires fill her with excitement and pleasure but precipitate a gradual descent into hell.

Gilbert believes he could forgive her anything, but the lies continue to spread, threatening Helen’s peace of mind and, above all, her physical safety. Will the secrets of Helen’s past get in the way of their future?