Here’s an interview with Celeste Prater. Take it away, Celeste…

That’s a hard one. I’ve only been writing for a little over a year and all focus has been on building the Fueled By Lust series. I love each book of the series. The storyline is so intricately woven together it’s hard to point out which one stood out. However, since I have to choose, I’ll go with Lucien’s story (book 4). I brought the characters out into deep space with a lot of surprises and a very tough-as-nails heroine.

Back when I had time to read other people’s stories, I was hooked on Maya Banks and Shayla Black. I loved that they made sure to include an actual plot line. Their characters felt three-dimensional and I could vividly picture their lives occurring. I try to bring that to my books as well.

From my dreams. The hot, alpha males of the series showed up and introduced themselves when I needed a starting point to begin my first book, Drusus. Going forward, my inspiration to continue writing is the fantastic feedback I’ve gotten from the readers. When they’re begging for the next book to come out, that’s when I knew I’ve done them justice.

Not really. It’s not like I make sure to turn around three times before I turn my computer on, or anything like that. I just try to write whenever I have the opportunity. Usually, that consists of my lunch hour, breaks, after work, and weekends. Hopefully, one day I can do this full time.

At home. I wrote my first book, Drusus (book 1) sitting at my computer desk with a tower PC. It started feeling like a job since I sit at a desk at my day job. I felt stuck and hated it. I now have a laptop with WIFI and that has been totally freeing. However, I do prefer writing propped up by a bunch of pillows on my bed with my cushy lap desk.

I love each one of them. I have to say that Maxim is my favorite. He’s the jokester of the group and a total badass, but he’s also extremely loyal and will have your back in a heartbeat. Maxim plays a role in each book and he’s going to get his full story next. Each character has his own unique personality, so I feel weird saying Maxim’s the favorite. Drusus, the prince, is a serious dominant alpha and loves his warriors, Severus is tough, but has an inner vulnerability that’s hard to see, Cato is a tough biker, but at heart is a family man that wants lots of babies, Lucien, the emperor, is extremely intelligent and cares deeply for his people, and Caelius is so freaking sweet, but will pound your head in quick if you mess with him or those he loves.

I actually wanted to be an artist. I paint and draw; however, I found out pretty quick as an adult that the pay is atrocious. I needed to eat.

It’s easy to get in the mood. I’m always dying to find out what the heck is going to happen next. I may write these books, but they’re constantly surprising me with where they take me. Sometimes I feel like I’m really a medium and these guys are just feeding me their stories. I look back over the story line, shake my head in confusion, and say, “Where in the hell did I come up with this stuff?”

The best one ever was from the first place I submitted the manuscript. They asked me to provide more world building for my alien planet and verbalization in the sex scenes. I was obviously holding back on my potential. That snapped me out of it real quick and I blasted them with some damn good stuff. I still got rejected, but it wasn’t from the writing. I pissed the submission editor off when she kept losing my edits. I’d wait weeks and then ask about it and she’d say she didn’t get them (three times). I submitted them back to their main website and her two other emails and then politely asked for a response that she’d received them. She rejected me within 30 minutes saying she had a 24-hour turnaround window. There was no way she could have read the edits she’d asked for. Looking back, I’m glad it happened since that publisher takes lifetime rights for books. That was just a little too much in my opinion.

Thankfully, I haven’t had that happen yet. However, I do find myself becoming stuck in a corner if I try to force something that wasn’t in my original ‘free writing like a maniac period’. Once I get back in the ‘open your mind and it’ll happen mode’, then it starts flowing again.

Hey! Who says they’re not real! LOL! <wink> I would love to have Cato ride up to my house on his Harley and we go on a road trip. That’s my ultimate fantasy. He’s very laid back and smart. I think he’d be fun to talk with whenever we stop and stretch our legs. I could see him in Sturgis, ND. He’d definitely stand out.

I’d love to meet Laurell K. Hamilton. Just reading her tweets lets me know the woman has some smarts and sass. I think she channels her character Anita and probably has many of her characteristics.

Science fiction and paranormal. It lets me ‘color outside the lines’ and bring my dreams to the page.

Book 6 of the series. It’s Maxim’s story and should be at the publisher’s by time everyone gets to read this interview. The fans have been begging me to give him his shot at happiness. It was time, anyway. It’s going to reveal a lot of the ‘subtle hints’ I gave within Caelius’s story regarding the necklace and something that happens to Rhia at the end his story.

While I have the chance, I’d like to advise the readers that the series is best read in sequence. I utilize something I haven’t seen in other series (that I read, anyway). I’m very careful on syncing the timelines. I will give you the full background on what a secondary character was doing at the exact same time that they were interacting with a main character in a previous book. When their story finally comes up, it’ll give you that ‘ah ha!’ moment.

I entered Drusus (Book 1) in the RWA Passionate Ink’s 9th Annual Passionate Plume award contest for published authors. I was a nervous wreck. There were hundreds of entries by well-known authors. I didn’t think I stood a chance. Drusus is my first book EVER and my confidence was shaky. That self-doubt definitely went away when he was nominated as one of the top 5 finalists in the SciFi/Fantasy category. When he pulled third, I almost fell over. It was very exciting and boosted my confidence.

The heavily accented voice coming through the phone oozed sexy, virile man and sent chills skittering across her skin.

“I have a confession, my bellula.”

Rhia wasn’t even surprised at the shot of tingles traveling her skin and making a direct beeline to her clit. He’d whispered that word across her skin before. She tried to steady her breath.

“Okay, so confess.” Umm, he was growling now. That shit just did crazy things to her girly parts. She was toast. Fine hairs rose across her skin, as if tuning in to that sensuous sound.

“I find it very arousing that you think of me in that way. Even when I’m at my worst, you view me in a positive light. I wish you were here with me right now. Do you miss my touch, Rhia?”

She could barely get her words past a soft whisper. “Yes. Very much.”

Rhia heard the distinctive rustle of material again and pictured him shifting on the bed. She imagined him sliding a broad hand down his chest, across the ridges of his abs, and resting just above his groin. She grabbed a pillow and released a moan deep into the fabric.

“Will you do something for me?”

“Turn the TV off and lower the lights.”

“It’s off and only the bathroom light’s on. It’s dim in here.”

“Good. Tell me what you’re wearing.”

The words spewed out of her mouth. She wanted to get to the next part as quickly as possible. “Button down blouse and shorts.”

“Are you wearing a thong?”

“Yes. What are you wearing, Caelius?” A low rumble sounded against her ear.

“Nothing. Absolutely nothing. There’s a thin sheet resting across my hips. Does that turn you on, Rhia?” 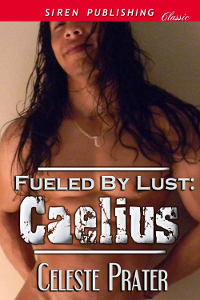 Caelius Meron strips at Heat Seekers Male Revue just so he can find his mate. So imagine his shock when he finds her in a cooking class he was forced to attend. So what’s the problem? There’s twenty-two of them according to Rhia Brennan. Undaunted by her claim that he’s too young, Caelius battles every roadblock she places. But what if one may be too difficult to ignore?

Kallon Aceso knows exactly who should own his heart, but Ulixes Dionysus doesn’t appear to want it. But is it really something else buried so deep that it may keep them apart forever?

Travel with these two Insedi as they both chase their hearts desire, only to be thwarted by misconceptions and mistakes from the past. Can they scale these insurmountable walls, or will they have to walk away and forever mourn what they could never have?

Book 5 in the Fueled By Lust Series brings back the sexy males that make your legs tremble just by saying your name. 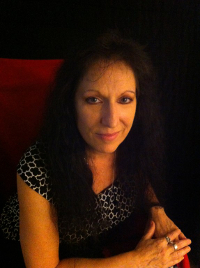 I was born and raised in a small town between Dallas/Fort Worth and Austin. Wanting to see more than my small Texas town, I joined the Marines, which satisfied my craving to see more of the U.S. and my drive to see if I could be one of the few and the proud.

A firm believer in educating the mind, I have achieved several advanced degrees, the latest being a master’s of science.

Drusus, Severus, Cato, Lucien, Caelius, Maxim and many more have swirled in my dreams until I had to bring them to life and allow them to find love within the pages of the Fueled by Lust book series.