You are here: Home / New Releases / 26 Hours in Paris by Demi Alex (@demialex2u)

One day to see the sights.
One night to change your life...

Magazine writer Kathryn Taylor is traveling from New York to Paris for work. But the flirtatious Frenchman she left long ago is waiting at the airport–and he wants to play. . .

No one can guide Kat through the sensual city’s delights like Marko Renard. He let her get away once, and now he’s determined to make her stay–even if he has to tie her down. He will wrap her in cashmere, tease her tongue with chocolate, and take her to the peak of the Eiffel Tower . . . But can he convince the bohemian beauty she belongs with him, in his luxuriously decadent world? In business, he’s the master–but it’s Kat’s body and soul he truly longs to rule. He has just enough time to show her the pleasures of the boulevards, the boulangeries–and the bedroom. To finally get her to just say oui, he’ll have to seize the day–and the night. . . 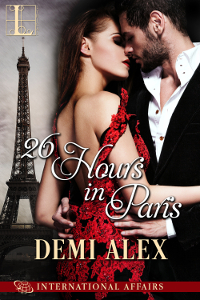 “You calling him?” Justin stepped out of his office and sidled up behind her. A woman couldn’t have a moment with her own thoughts in her own office when she worked with three of her best friends. Paul’s Justin, her Justin, with all his mathematical genius, was City Wing’s accounting department.

“Because,” she replied, pretending she was too absorbed in the printouts about the Eiffel Tower to give the question more merit, “this is about work. I need to prove that people find love in Paris, not recapture a lost possibility. I’ve worked my ass off to get to where I am. I’m not screwing it up by spinning my wheels over something, someone, that’s never going to happen.”

“Right. If that’s how you really feel, you need to get laid by a real man and let the overseas god go. Your man from the past is the reason nobody else is enough for you. You know you’re measuring these poor guys against a dream guy. Let him go, or invite him back.”

“Past,” Kathryn said, regret swelling in her chest. “It didn’t work then. It’s not going to work now.”

“Stop, Justin. This isn’t about me and Marko. It really isn’t. Plus, we’re just friends.” It didn’t matter how she felt, because she knew she loved him, had always loved him, and would probably always love him. What mattered was that there was an ocean between them. “We’ve always been friends and will always be friends.” 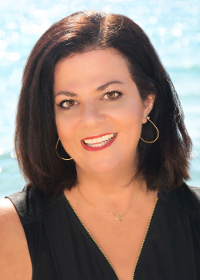 Demi Alex writes steamy romances, blending emotional fulfillments of the heart and carnal desires in her work. Born in Athens, Greece, and raised in her own version of a big fat Greek life in New York, Demi was infected with book and travel bugs early, and currently admits the only therapy for this condition is to combine the two in fictional stories that allow her characters to let loose and experience all they crave. She attended SUNY at Stony Brook, and after changing her major numerous times, graduated with a degree in Public Policy and International Studies. Her characters are loosely based on people she encounters while she travels or during the time she spends matching homes to owners as a Realtor. She simply has a passion for matchmaking that can’t be put to rest. 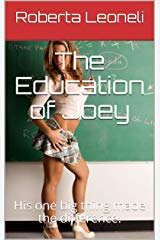 The Education of Joey by Roberta Leoneli