Evangeline Scott was hoping for a fun night on the town after a hellish day. What she couldn’t have imagined was getting kidnapped by alien slavers and then left to die on an abandoned ship.

Kai Dallen and Roan Quinn were having some bad luck of their own when they found themselves set up by an old adversary and trapped in the vault of a Dhuaation Pharaoh’s ship with no way out. When Khaman-Ra makes them an offer they can’t refuse, the two space pirates end up rescuing a ship full of human female cargo. All three males are immediately drawn to one of the beauties and make an agreement to satisfy everyone’s desires. The only problem is, they didn’t think to ask Eve and when she wakes up to find that she’s now married to three aliens she’s mad as hell. By the time all four of them realise their true feelings, will it be too late, as a woman from Roan’s past threatens to ruin it all? 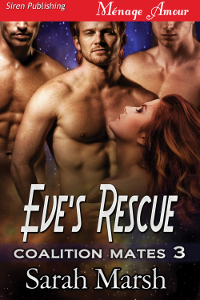 Kham handed her a drink when the server came around, and she enjoyed the mildly fruity wine that he had given her. When all of the men suddenly stilled and looked off to the right with expressionless faces she didn’t know what was happening. But a few seconds later when a tall beautiful blonde with an icy cold smirk strode up in front of Arkenon, Eve guessed she was about to meet her evil nemesis.

“Arkenon, so good to see you,” the woman said in an exaggerated tone as she stopped a few feet in front of Roan’s brother.

She was wearing an almost nonexistent bright red dress. There were only a few straps of material holding it onto her clearly enhanced bust. Eve could feel the jealousy creeping up as she compared her curvy frame to Lara’s willowy model-size body. When the other woman’s eyes found her and did a once-over she was quickly dismissed as they then moved on to Roan’s body.

“So,” she continued in a haughty tone, “your wayward brother has finally come home to do his duty.”

“Not likely,” was all Roan replied in return as he put his arm around Eve and pulled her closer.

“Lara, you were notified that Roan is now mated and that due to your instability the agreement between our families has been annulled,” Arkenon said in a respectful voice that was surprising considering the loathing that Eve could see in his eyes.

“Well, you can’t blame a girl for trying, can you? I thought I’d give Roan a chance to change his mind once I saw the homely little alien he’s tied himself to,” Lara replied, running her hands along the farce of a dress she was wearing, “I’d even be willing to take on the pharaoh and Kai if you insist on a package deal. I think I may enjoy that very much actually.”

Eve was seriously pissed now. This hussy had not only called her ugly, but the crazy biotch had actually just offered to step in and take all three of her husbands from her!

“Why you crazy bit—” Eve said as she tried to lunge forward and grab the other woman by her brassy blonde roots.

Sarah Marsh was born in British Columbia where she still lives, she has only recently began her writing career finding it the perfect outlet for taking the edge off a nine to five office job. She’s been a science fiction and romance junkie for years and when her imagination started to take the characters she’d read about even further in their adventures she decided to try writing something of her own. Sarah’s also a former pastry chef and spends a lot of time cooking and baking for friends and family as well as painting and knitting. Her biggest weakness is animals of any kind, she loves a happy ending.