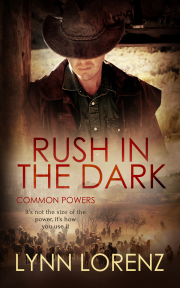 RUSH IN THE DARK (COMMON POWERS #2)

Rush is so deep in the closet he can’t find the door, but meeting Brian might give him the courage to step out of it.

When Brian and Rush meet in a dark alley, sparks fly. The attraction is fast and hard, but Rush is a rancher with a reputation to uphold and Brian is out and open.

Both men have secrets, including the small powers they each have, and a relationship means they might have to share. It would require Rush coming out of his closet and putting his ranch and his friendships with the people around him at risk.

For Brian, it means putting his heart on the line for a man who’s afraid of being himself. He’s been down that road before and Brian won’t go back in the closet, not even for Rush.

Each time they’re together, Rush and Brian set the air around them on fire. As they move closer, both are still holding back, still unsure of each other. One of them will have to take the first step or this thing between them will flounder.

For Rush, it’ll take a huge step and a lot of trust to risk his entire life in the small Texas town of Spring Lake. And once he’s out, there’s no going back.

For Brian, his heart isn’t the only thing at risk. If he keeps seeing Rush, he knows he might just lose his life.

Reader Advisory: This book contains scenes of murder and references to rape, abuse, stalking and murder.

Publisher’s Note: This book has previously been released elsewhere. It has been revised and re-edited for re-release with Pride Publishing.