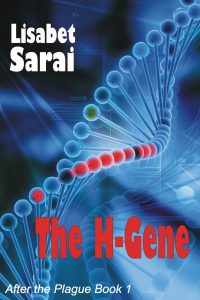 Dylan Moore will do anything for freedom. Seven years ago, a gay plague spread to heterosexuals, killing millions and sparking brutal anti-gay riots. The Guardians rounded up men who tested positive for the homogene and imprisoned them in remote quarantine centers like desolate Camp Malheur. Since then, Dylan has hacked the camp’s security systems and hoarded spare bits of electronics, seeking some way to escape. He has concluded the human guards are the only weakness in the facility’s defenses.

Dylan’s plan goes awry and Rafe comes to his rescue. Soon they’re both fugitives, fleeing from militant survivalists, murderous androids, homophobic ideologues and a powerful man who wants Dylan as his sexual toy. Hiding in the Plague-ravaged city of Sanfran, Dylan and Rafe learn there’s far more than their own safety at stake. Can they help prevent the deaths of millions more people? And can Rafe trust the love of a man who deliberately seduced him in order to escape from quarantine?

Note: This novel was previously released by Pride Publishing under the title Quarantine. It has been revised and re-edited for this release.

Rafe lay on his side in the antique four-poster bed, curled around Dylan’s slender form as though to protect him. One arm circled the ex-prisoner’s shoulder. Dylan’s butt pressed against Rafe’s groin. His rising dick brushed against pale, smooth skin. Dylan stirred but did not wake, nestling more firmly into the hollow made by Rafe’s bent spine and drawn up knees.

Wan sunlight filtered through the drapes. The window bars made geometric patterns on the oriental rug. Blood pounded in Rafe’s cock and he thought about waking his partner. Dylan would no doubt be eager to satisfy Rafe’s need, but the other man’s deep, measured breathing made Rafe reluctant to disturb him. After the physical trials he’d endured, the guy needed his sleep.

Rafe’s cock ached like hell, though. Lightly, barely touching, he rubbed his swollen dick over Dylan’s ass. It was like fucking silk, stretched over taut, firm muscle. Pre-cum leaked from the bulb, reducing the friction even further. Rafe began a slow, careful rock, sliding his cock up and down in the crevice between Dylan’s cheeks.

It was fabulous agony, holding back this way, when what he really wanted was to pull his lover’s cheeks apart, drill into the dark hole between them, and let everything rip. At the same time, the self-imposed constraint just aroused him more. Dylan’s soft skin caressed his rod, teasing, almost unbearable. Rafe reined himself in, forcing himself to keep the rhythm slow, the thrusts gentle, even as his balls tightened and his cock screamed to bury itself somewhere hot, tight and wet.

He kept his need in check, wanting to prove to himself that he wasn’t a selfish brute who’d deprive his lover of much needed sleep. His mind, though, took him in totally different directions. He imagined seizing the slumbering man, dragging him to his hands and knees, and slapping his ass, just to see the rosy imprint of his hand on that white flesh. He’d seize the reddened butt cheeks, hold them open, and ram his cock through the puckered entrance, making the other man wail and beg—first for him to stop, but soon for more. In his mind, Rafe reamed the fag’s ass, harder and faster than ever before, determined to show the kid what it felt like to be fucked by a real man.

Gradually his heart rate and breathing returned to normal. Smiling, pleased with himself, he pulled Dylan’s sticky body closer to his own. He could still feel the slow rise and fall of the younger man’s chest. Damn, but the kid was a sound sleeper! Then he realized Dylan’s body was shaking with silent laughter.

“How long have you been awake?” Rafe demanded.

Dylan flipped over and planted a sloppy kiss on Rafe’s mouth. “A while,” he said, amusement sparkling in his emerald eyes. His rigid dick curved up to tickle Rafe’s belly and Rafe’s own recently emptied cock twitched with new life. “Now, can I have a turn?”

You’ll find information and excerpts from all Lisabet’s books on her website (http://www.lisabetsarai.com/books.html), along with more than fifty free stories and lots more. At her blog Beyond Romance (http://lisabetsarai.blogspot.com), she shares her philosophy and her news and hosts lots of other great authors. She’s also on Goodreads, Pinterest, and  Twitter. Join her VIP email list here: https://btn.ymlp.com/xgjjhmhugmgh