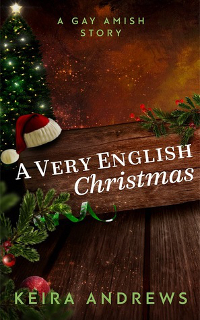 Regular readers of my reviews will know that I’m a big fan of Keira Andrews’ Amish books, so I was very happy to check out this short story featuring the two main characters from the series, David and Isaac. It won’t make an awful lot of sense unless you’ve read the other books, to be honest, so if you’re looking for some gay romance (with hot sex scenes) that’s very different, then you should definitely check them out.

A Very English Christmas is set after the third book in the series, and is a quick, sweet and sexy tale about the boys’ first Christmas together as a couple in the “English” world, as they call it. They’re still learning about the things that they’ve had no experience of in their Amish lives, still trying to build a life together. It was really great to read a little bit more about the boys in this great short story, and I very much hope the rumours of another book in the series are true!

Overall, a must-buy for fans of the series. If you haven’t read the other books yet, though, I wouldn’t suggest starting here. Read them in order and all will become clear – they’re unique, incredibly well-written and engaging books. 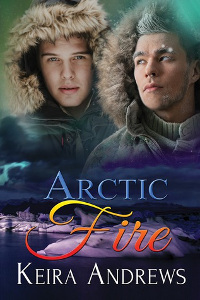 I seem to be reading quite a lot of Keira Andrews’ books lately, but that’s no hardship. This one, Arctic Fire, is, as you’ve probably worked out, set in the Arctic, which makes it incredibly unique and fascinating. A world most of us can only imagine. Add in two hot guys who happen to be gay, and you’ve got a recipe for some smokin’ hot action – despite the freezing weather.

This book is novella length, so I don’t want to say too much about it and give the plot away. But let’s just say we have two guys thrown together by circumstance, and they make the most of it. It’s a great story with plenty of depth, a fascinating setting, great characters and, as always, super hot sex scenes. Overall, this is another winner from Andrews, and if you’re looking for a fairly quick M/M read that’s different, you should definitely check this one out. 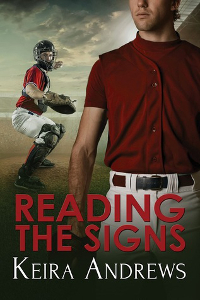 I’ve read several of Keira Andrews’ books now, and have enjoyed all of them, so was delighted to read and review this one also.

Reading the Signs tells the story of rookie baseball pitcher Nico Agresta and veteran catcher Jake Fitzgerald. Nico is an up and coming athlete who has had a crush on Jake for years, but because of his family’s conservative nature and his dad’s bigoted opinions, Nico has hidden his true sexuality. Willed it to go away, even, wanting to be “normal”. But when a transfer lands Jake on his team, the old crush comes back into full force, especially since the two men end up working closely together.

Jake’s out to his family, but hasn’t announced it publicly, not wanting the hassle of media attention. He’s also single, so not being out hasn’t really bothered him. That is, until he meets Nico again after many years, and realises the gangly kid he remembers is actually now a gorgeous young man. Things suddenly become very complicated.

Overall, this is a great read. It’s probably my least favourite of Andrews’ books so far, but that’s down to the baseball element, much of which went completely over my head. It’s nothing to do with her writing, the story, or the romance, which, as always, was well-written, sensitive and sexy. There’s angst, love, loss, arguments, and lots, lots more going on between the pages of this book, which I’d definitely recommend for gay romance fans, especially if they’re into sports. 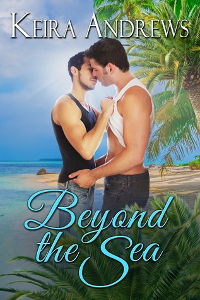 As followers of this blog will know, I’m a big fan of Keira Andrews’ work, therefore I was delighted to receive a review copy of her latest release, Beyond the Sea. This is a gay for you tale set on a desert island – escapism at its very best.

This tells the story of Troy Tanner, a boy band member who walks out mid-tour in the hopes of giving his drug-taking little brother a wake-up call. He charters a flight back home to the States, but unfortunately a freak cyclone takes the plane down in the South Pacific. Troy and the pilot, Brian Sinclair, are marooned on a desert island. They have a minimal amount of provisions which they manage to rescue from the plane, but other than that, they’ve got to learn to survive on what is on and around the island.

As time passes by and the chance of discovery and rescue continue to dwindle, the pair grow closer, and soon, their friendship develops into something much more. How will these two men – who always believed they were straight – cope with this unexpected turn of events? If they survive, will their love do the same?

This is an amazing read – Keira Andrews has done it again. I find her writing very absorbing and very easy to read, so whizzed through this book in a few days. The storyline was great, as were the characters, and the sex and love scenes were fantastic. I very much enjoyed Beyond the Sea, and would wholeheartedly recommend it to fans of gay romance. 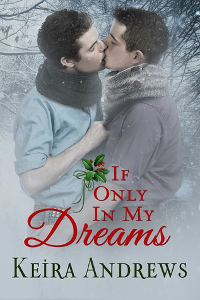 If Only in My Dreams is a new adult gay romance novella from Keira Andrews. It tells the story of Charlie Yates, who’s in a horrible predicament. He’s supposed to be heading home from college at Christmastime, and he’s promised his little sister – who’s been very ill – that he’ll be home to open presents with her. Unfortunately, inclement weather means Charlie’s flight has been cancelled. Public transport is a no-go, leaving only a hire car as an option. But to make things worse, all the cars have been hired out. And the last one has been rented to the very last person Charlie expected… Gavin Bloomberg. The boy who broke his heart, and lives right down the road from him back home.

The two men haven’t spoken in years, but, faced with the prospect of breaking his promise to little Ava, Charlie is desperate. Can the two men put their problems behind them and share a car journey across America? And, forced into a combined space together for days on end, can they work through their issues and repair their friendship?

This is a fantastic read, as always, from Keira Andrews. It’s angsty, bittersweet, romantic and sexy. I whizzed through it in a couple of days, and would definitely recommend it to anyone looking for a hot, romantic holiday read. 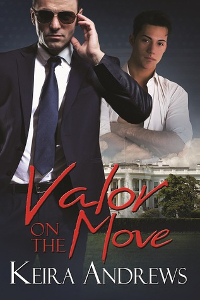 Well, Ms Andrews has done it again! I loved her Amish books, so was eager to read this when it came out. I mean, Secret Service agent – what’s not to like? And I definitely wasn’t disappointed. Valor on the Move tells the story of the president’s youngest son, Rafael, whose codename is Valor. He’s a 21-year-old gay man, who’s hanging on for a final few months until his father’s term in the White House is over. Then he plans to come out, tell his parents he wants to be a chef, and head off to Australia to pursue his dreams. In the meantime, he’s keeping quiet, not wanting to rock the boat or affect his father’s career.

It’s all going well, until Rafael’s security detail is changed. Shane Kendrick has worked his way up through the ranks, and plans to continue doing so. He’s happy to be tasked with looking after Rafael, who is nicknamed “the mouse” because he’s so well-behaved – particularly compared to his siblings.