Life’s a beach, or about to become one, for newly-wed young Helen. Fresh out of uni, she is on her way to a private tropical island, on the Queensland coast, to sample its delights before her adorable husband can join her for their honeymoon.

Trouble is, her sultry hostess Selena had more than cute portraits in mind when she persuaded her to pose for the lens. Can Helen ignore the steamy fantasies which this blue-eyed Circe is fanning in her heart?

Confused by her own unexpected desires, the angel-faced bride is trying so hard to remember who she is, and where she came from. So hard. But sometimes, trying is just not good enough. Especially if a gorgeous sorceress wields the tempting hand. 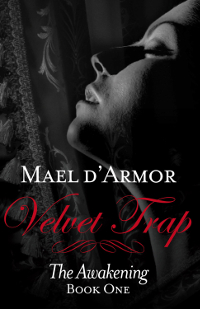 Helen has not bothered to slip out of her clothes. Lying on a thick futon in the guest bungalow behind the main house, she is staring at the dark shape of a motionless ventilator on the ceiling. The mist in her mind has cleared slightly and the hiccups are gone, but she is still floating on clouds. Sleep is eluding her, though, kept at bay by a kaleidoscope of thoughts and impressions. The chopper ride to the island, the coral swim, the sunset watch on the deck, that rather unsettling conversation …

As if born of the night, muted strains of music begin to waft through her open window. She can’t make out the melody but recognises the soft sounds of a pan flute. Intrigued, she gets up gingerly in her darkened room and makes her way to the window. The music is coming from Selena’s bedroom across the lawn, where light is pulsing dimly through the gaping French doors. Candlelight probably, judging by the flickering glow.

A shape now, outlined against the glow. A woman’s shape, moving sensually in the half gloom, dancing it seems. Yes, dancing a slow, sinuous dance. Elbows raised high, hands holding back long strands of hair, hips gyrating. The body glides and flows in perfect unison to the tune, as though part of it.

Helen is puzzled by the performance. This is not your standard workout. A relaxation technique perhaps, before sleep? Whatever it is, she cannot take her eyes off the undulating silhouette. The dancer has moved to the right and stepped into the glow. Helen catches her breath, for Selena is stark naked, and the candlelight is fluttering across her hips and breasts. Luscious, curvaceous breasts, which sway gently to the rhythm of the flute.

Helen feels a twinge of guilt. She is intruding on a very private moment. What if she is seen? She is only metres away. How awkward. But that’s impossible. Her own bedroom is cast in complete darkness; there is no way her hostess could know she is here, peeping.

Her curiosity snuffs out her qualms and she watches on, with growing fascination. Selena has started spinning in slow motion as she rolls and sways. Like a golden extension to the notes, the candlelight is playing lascivious games with her curves, coaxing out of obscurity now the swell of a hip, now the crescent of a buttock.

Helen cannot make out her expression. The dancer’s face remains stubbornly plunged in darkness, screened by unruly locks of hair. No face then. Just a flowing shape, without identity. A tantalising shape. Helen is curiously bound to the aura of this lithe body. She had no idea the female figure could be so enticing, so mesmerising. She had always had an aesthetic appreciation of the beauty of her sex, of course, acquired, among other things, from her academic meanderings through European art, and gleaned also, more prosaically, from the countless health and fashion magazines she had pored over as a teenager.

But this – this is something else, although she is not sure exactly what is moving her. A longing, an attraction, oddly foreign to the pinpricks of jealousy she had felt before, when scrutinising the glossy, elongated and perniciously photoshopped bodies of the vapid models that spilled out of her monthlies. Not envy, then, but a bizarre captivation for this fluid silhouette. Is this the effect of the mist still drifting through her mind? Perhaps it is. She hopes it is. She does not know how long she has been standing there but, surprisingly, her heart aches with the pain of sudden loss when the music finally dies and Selena moves beyond the door frame.

Born in a cosy village in Brittany, France, Mael D’Armor has worked as an academic, cartoonist and young children’s author. He came to Australia in search of wide spaces and exciting life forms. For reasons as yet unclear to him, this prompted his move into fiction and his first, award-winning short story was published in 2012. He writes about the complexities of desire, frustration, hope, love and French kissing – though not always in that order.

Mael will be awarding an eCopy of Velvet Trap: Awakening Book 1 to 3 randomly drawn winners via rafflecopter during the tour, and choice of 5 digital books from the Impulse line to a randomly drawn host. Be sure to follow the tour and comment; the more you comment, the better your chances of winning. The tour dates can be found here.