A detective, his boyfriend and their dog. That’s the Lindenshaw mysteries in a nutshell. Old Sins is the fourth instalment in the series, and not only does Robin have a murder to investigate, he and Adam have got the “little” matter of their nuptials to start planning. And, of course, Campbell the Newfoundland gets his cold wet nose into things, as usual.
END_OF_DOCUMENT_TOKEN_TO_BE_REPLACED

Two Feet Under began life as a conversation in a car, when my eldest daughter and I got stuck in a traffic jam on the way to an author/reader event. It gained a criminal mastermind as a result of another conversation in the car with her younger sister. It got its background thanks to the popular television series “Time Team” and a setting care of the northern part of Hampshire. The plot came from the author’s twisted imagination, via a lot of checking. And at least one character is based on people I know. You have been warned.

END_OF_DOCUMENT_TOKEN_TO_BE_REPLACED

Why do you choose to write stories set in this time period?

Of all the historical eras I write in, the early twentieth century feels the most comfortable. I have tried my hand at Regency and WWII, but my heart lies within the thirty or so years either side of 1900. Why? Because ever since childhood, I’ve read authors from that era. Conan Doyle, Jerome K Jerome, Wilkie Collins, EM Forster and the like. I can almost see and hear that time and writing the right cadence for the dialogue comes naturally. Add to that a passion for WWI poetry and living in an Edwardian house, then my choosing that era almost seems inevitable.

END_OF_DOCUMENT_TOKEN_TO_BE_REPLACED

Broke Deep is the story that refused to sit down and take no for an answer, a tale that waited patiently in my works-in-progress folder for a setting and a context to do it justice. When the Porthkennack universe opportunity came along, Broke Deep bounced into my mind like the most insistent plot bunny, saying, “That’s my home! Write me there!” 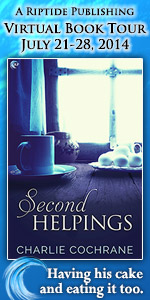 I’m thrilled skinny to be dropping in here as part of the Second Helpings blog tour. A million thanks to Erotica for All for having me as a guest.

One of the pre-release reviews of Second Helpings (look at me being all British and swiftly passing over the fact that the review was a very good one) said, “There is a depth and honesty to this story that sucks you in, making you want more.”  That’s the sort of remark that makes an author grin from ear to ear, but it also got me thinking. Have all my stories got depth and honesty? I’d liked to think so but, being brutally honest, there’s probably a wide range within my writing and I’ve no doubt I fall short of highest expectations at times. Sometimes you really connect with a couple as you write about them (my long running detectives Jonty and Orlando would be a prime example) and sometimes you’re just acting as “biographer”.