The best thing about the start of a relationship—even one as casual as the understanding between Jack and Colin—is the endless realm of possibilities. Obviously the characters can only take one path forward, but that doesn’t mean we have to ignore the rest. Read on for a glimpse into Jack Mason’s fantasies, as he considers the different ways his first time with Colin Sloan might go.

Maybe Colin would take the lead.

There was a stubbornness to him, Jack had quickly discovered. Despite Colin’s even temper, he wasn’t shy about his opinions—or about anything else, really. Surely he wouldn’t be shy about what he wanted in the bedroom.

It wasn’t his first instinct, but he could enjoy being held down. Didn’t matter that Colin was so much slighter than him, that in an actual contest of strength Colin wouldn’t stand a chance of victory. He could still shove Jack down on the bed, and God that would be hot. Of course Jack would go with it. Grin as he landed, body sinking into the slight bounce of the mattress.

Colin would follow fast, kneeling above him, dragging his own shirt off and casting it aside. Jack had already spent a whole lot of time imagining this view, the bare skin beneath those button-up shirts. He would scramble with his own clothing in the same moment. Desperate to be naked, desperate for Colin to join him.

They’d fall together like the wildest chaos, Colin’s weight settling perfect on top of him. Colin’s hands holding him down, pinning his wrists to either side of his head. Colin’s mouth—

Colin’s mouth would be perfect. Claiming and commanding, greedy as he took Jack’s mouth in a fierce kiss. Their bodies would already be moving together. Nothing coordinated, nothing intentional. Pure instinct, Jack’s hips rising to seek friction, Colin riding down against him. The hot slide of their cocks in the overheated press between them.

God it would be good. Frantic and eager, and quickly leading to more.

“Can I fuck you?” Colin would ask the question breathlessly, easing his grip on Jack’s wrists but not letting go entirely. Allowing the question to linger. Meeting Jack’s eyes with the steady strength of confidence.

“Yes,” Jack would groan. The upward arch of his body entirely involuntary, friction setting a fresh jolt of pleasure alight in his blood. “Yes, absolutely, fuck— Do it.”

And oh, Colin would. He’d take his time about it, too, loosen Jack up with maddening patience. Those long fingers, slick and warm as they moved inside him. Colin would know exactly how to touch him, would ignite a perfect cascade of sensation along Jack’s senses, as Jack spread his legs wider in blatant encouragement.

Colin would kiss him again, swallow the moan directly from Jack’s mouth as those fingers curled deep and tantalizing. Would kiss a hot line down Jack’s throat, biting gently at sensitive skin.

After a teasing eternity, Colin would deem it enough.

“On your front.” Colin would accompany the command with a guiding touch, urging Jack to roll forward and then up onto his knees. Jack would obey both words and touch, even as he let his shoulders fall forward, his elbows press into the pillow. Presenting his ass eagerly for what came next.

There would be the quiet but audible snap of a plastic bottle cap, and then a glimpse snuck over his shoulder at Colin slicking his own cock. A perfect moment of silence stretching taut between them. And then a blunt nudge at his entrance, and Jack would breathe out, relax his body as Colin fucked forward.

The sensations would be overwhelming, and Jack would moan as he was filled—as he felt every inch gradually fill him—as the intimate ache stretched him open little by little. Almost too much. Perfect.

Stillness then, when Colin had no further to go. A handful of seconds stretching into an eternity, delightful in its trembling anticipation. Colin would drop forward along his back, brace one hand in the mattress as he pressed a kiss to Jack’s throat, a second to the side of his jaw, a third to the broad muscle of his shoulder. Hot breath panting over bare skin.

Jack would laugh, a breathless sound. “God help me, if you don’t hurry up and move—”

And Colin would, drawing back and then rolling his forward again before Jack could even finish making demands.

They would groan together, no more stillness after that. Mutual need would drive them forward, and they would find a rhythm. Hurried now. Desperate as arousal mounted between them. Moving together with quick thrusts, Colin’s cock filling him deep and hard, carrying him toward completion. Jack would reach for his own cock only to be swatted away, Colin’s sure grip circling him a moment later. Stroking in counterpoint to every forward thrust as the edge swept ever closer.

Colin would come first, but Jack wouldn’t be far behind, the satisfaction glorious as his orgasm burned the rest of the world away.

Hi everybody! I’m Yolande Kleinn, and I’m thrilled to welcome you to the Covet blog tour. I’m giddy to be here myself, and I hope you’re looking forward to my kinky contemporary M/M/M love story. I had a terrific time writing this book—getting to know Jack and Colin and Peter—and I can’t wait for you to meet them too. Follow along for the chance to win a $30 Riptide Publishing gift card! 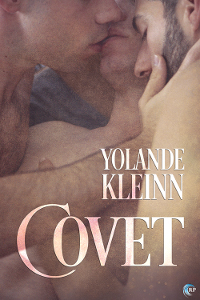 Jack Mason—graphic designer and unrepentant player—has never been interested in monogamy. He certainly isn’t looking for romance when he meets Professor Colin Sloan.

Newly single and not looking for anything serious, Colin is intrigued by Jack’s offer of a physical affair with no strings attached. Becoming friends wasn’t part of the plan, but as accidents go, this one’s pretty great.

Peter Mason is Jack’s identical twin. In a long-term relationship himself, Peter tells no one that he’s falling for his brother’s newest favorite, even as the secret creates tension with his girlfriend.

When Peter’s relationship falls apart, he seduces Colin, fully expecting Jack to forgive his transgression. But Jack is keeping secrets too—he hasn’t told even Colin that he’s fallen in love. Suddenly the twins are feuding, and Colin is caught in the middle, blindsided by the revelation that he doesn’t want to choose between them.

Now all three must find a way to share, or they’ll tear each other apart.

A Minnesotan by both heart and geography, Yolande has plenty of experience weathering tough winters. Her favorite method: distracting herself with warm beverages and even warmer stories. A night spent with a good book is heaven. A morning free to write, with a hot cup of coffee close at hand, is even better.

To celebrate the release of Covet, one lucky winner will receive a $30 Riptide gift card! Leave a comment with your contact info to enter the contest. Entries close at midnight, Eastern time, on September 23, 2017. Contest is NOT restricted to U.S. entries. Thanks for following the tour, and don’t forget to leave your contact info!