END_OF_DOCUMENT_TOKEN_TO_BE_REPLACED

Thanks for joining me on my book tour! I’m Quinn Anderson, author of the Murmur Inc. Series and On Solid Ground. I’m here to share some inside information about New Heights, coming out March 12th, including fun facts and more. Leave comments on the tour posts for a chance to win a $10 Riptide Publishing gift card!

END_OF_DOCUMENT_TOKEN_TO_BE_REPLACED 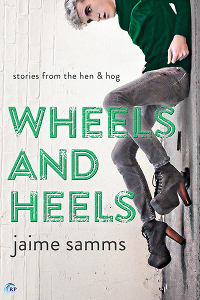 Welcome to The Pick Up’s blog tour, presented by Allison Temple and Riptide Publishing! The Pick Up is Book 1 in the Up Red Creek series. This cozy small-town romance tells the story of single dad Kyle, who moves back to his hometown with his princess-obsessed six-year-old daughter Caroline. He doesn’t expect them to stay long, until he meets Adam, Caroline’s too-hot and too-serious teacher.

END_OF_DOCUMENT_TOKEN_TO_BE_REPLACED

All things, no matter how good and loved, must eventually come to an end. When I originally planned to write my Ringside Romance series, it was only going to be three books. But then my lovely Justin came into being and there was no way I could leave this world without giving him his happy ending. So here we are, at the final stop on the journey, with both excitement and a few tears.

END_OF_DOCUMENT_TOKEN_TO_BE_REPLACED

Thank you for inviting me to stop by today! Hello, intrepid internet adventurers, and welcome to the blog tour for The Artist’s Touch, the first book in my Art Medium series. After the release of book two, Tested in Fire, in April, I’ll be giving away a $40 Riptide gift card, so please leave a comment for a chance to win.