Hello, everybody! I’m Alex Whitehall, and I’m here today touring for my New Adult story, Second Skin, which is about Jay and Roswell, who are on a journey of love, acceptance, and self-discovery. 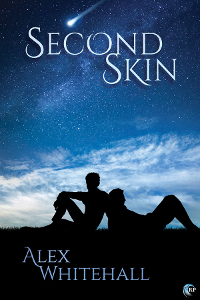 When Jay heads to the university’s learning center for help with his math class, he doesn’t expect his tutor to be tall, dark, and handsome. But Roswell is all that and more, and their instant connection over cult movies, books, and TV shows quickly evolves into dating.

That’s when things get tricky.

Roswell might claim he doesn’t have issues with Jay being trans, but when he’s constantly insisting they “take it slow,” Jay’s not so sure. He’s been hurt before, and he’s not going to let it happen again.

But then Roswell reveals that he, too, has a few secrets under his skin.

If there are two types of people in the world, Alex Whitehall probably isn’t one of them, despite being a person. Their favorite pastimes include reading, horseback riding, sleeping, watching geek-tastic television, knitting, eating, and running. And wasting time on the internet. And spending glorious evenings laughing with friends.

While Alex prefers sleeping over doing anything else (except maybe eating), sometimes they emerge from the cave to be social and to hunt for food at the local market. They can be found blogging, reading, and tending after their aloe plants.

To celebrate the release of Second Skin, Alex is giving away $25 in Riptide credit. Leave a comment to enter the contest. Entries close at midnight, Eastern time, on April 16, 2016. Contest is NOT restricted to U.S. entries. Thanks for following the tour, and don’t forget to leave your contact info!