Disgraced FBI agent Nick Truman failed to save his sister, who was held hostage by a drug cartel until he could give them Alex Crow, who eluded him. His epic downfall lands him in witness protection, where he plays by the rules and keeps to himself. But the murder of his neighbor brings danger to his door. He unexpectedly finds himself the champion of innocents and helplessly attracted to the homicide detective in charge of the case. Nick knows it won’t end well.

Homicide Detective Hank Axelrod is good at digging out secrets, maybe because he hides a big one of his own. He also suspects his husband has one foot out of the door of their marriage and the specter of single life looms unpleasantly on the horizon.

A murder resembling a previous one brings Nick into his world, a man who claims to be a mystery writer looking for a real-life resource. Hank’s instincts say he’s more than that, and he’s rarely wrong.

Torn between the errant soon-to-be-ex husband and the distracting, sexy stranger, Hank needs to focus all his attention on his murder case before he becomes the next victim. 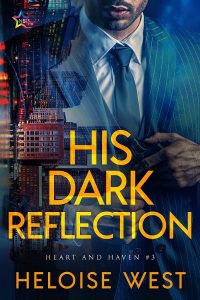 Hank rattled the keys in a one-handed grip to shake loose the house key from the rest. No lights on in the house and beyond late for dinner—starving and sleep deprived too. In his other hand, he held a thick file of case notes because the night wasn’t over for him yet. At least Len had left the porch light on.

After letting himself into the house, he placed the file on the end table, keys on top, and toed off his shoes. The windbreaker he shrugged out of hadn’t done much to keep the spring cold off.

The rocking chair in the living room creaked. Hank spun around, hand going to his holster.

“Easy, cowboy.” Len yawned. He snapped on the table lamp beside him. “I fell asleep. What time is it?”

“Jesus, Len. It’s two in the damn morning. Let me put this away.” At the bottom of the closet, the gun safe sat on a shelf. He knelt, spun the dial, and tucked the gun away. When he turned, Len stood, arms across his chest, brown hair tousled. Another yawn stretched his mouth wide. Hank, tired to the marrow, pulled Len into a bone-crunching hug, and Len laughed against his shoulder.

Relief tickled through him. On the drive home from the station, he’d feared the house would be empty. He inhaled the scent of Len’s pricey shampoo—vanilla and sweet tobacco with a hint of whiskey. His heart twisted with anxiety.

“You got caught up, I know. ’Sokay.” Len yawned again. “But I’m beat. She-Who-Must-Be-Obeyed wants me in bright and early tomorrow, so…” He stepped away from Hank’s embrace. Hank let him go with reluctance. “There’s lasagna and meatballs in the fridge. Or maybe you’re ready for bacon and eggs?”

“Neither. Both. I’ll figure dinner out while I read the case notes again. I need to make sure this guy doesn’t walk.”

Len turned around. “Hon? I know. You’ll be great. You always are. Night.”

“Night,” Hank responded as he picked up the paperwork. He sat in the rocker Len had vacated with the file in his lap and fell asleep with the first page between his fingers.

He awoke with a snort, thinking he’d heard Len’s muffled laughter and smiled. When he glanced at his watch, twenty minutes had passed since he’d first sat down. He’d sleep in tomorrow, but he still wouldn’t have caught up on all the sleep he’d lost over this one. Hank stood and stretched his aching muscles, contemplating a shower, but his deepening desire for bed and maybe sex to relax him led him into the bedroom and not the kitchen. Len’s nightstand lamp glowed, and his side of the bed rumpled but empty. Len’s soft giggle came from the other side of the bathroom door.

Hank rapped his knuckles against the oak. “Hey, babe?”

The toilet flushed. “I’m washing up! Be right there.”

A cold weight settled into Hank’s belly at his husband’s rushed, edge of guilty tone, slithery and with pointed scales brushing against his tender insides—a too-familiar feeling tilting the world on its axis. The bathroom door opened, and Len came out wreathed in the scent of mouthwash and minty toothpaste. “All yours.” He smiled but wouldn’t meet Hank’s eyes, making it all the harder for Hank to dislodge the sick feeling in his stomach.

“Who were you talking to?”

Len turned away from Hank. “One of the new interns drunk-dialed me. She’s a hoot, so we talked. Come to bed, Hank. You must be wiped out.” He slid between the sheets and pulled on the covers on Hank’s side.

Liar, the serpent in his belly whispered.

“I fell asleep in the rocker, so yeah, I guess I am.” Too tired to fight, he gathered up pajama bottoms and a T-shirt and headed into the bathroom. When he came out, Len lay facing away from Hank, his breathing even. Maybe asleep. Hank doubted it as he climbed into bed turned away from Len, his eyes wide in the darkness.

Hank slept later than usual, exhaustion stealing any memory of dreams he might have had. When he awoke, Len had already gone to work. What had Hank been so afraid of last night?

He went into the kitchen and started up the coffee. Not the first time one of Len’s friends had called drunk or upset. Len had a lot of friends. They helped him through Hank’s late nights. Although their marriage went to hell last spring, in the end, love forced them to work things out. Hank believed in Len, still believed the tearful, heartfelt promises of renewed fidelity.

He shoved a bagel into the toaster oven. But—he plopped down on a kitchen chair as if his bones had untied themselves—why did he have such a weird feeling last night? A couple of weird feelings, actually.

He’d believed Len when he returned to him and promised fidelity. Yet, he spent too much time with liars, thieves, cheats, and murderers, so maybe the distrust had rubbed off on him?

Or should he stick with his gut feeling Len had more to hide? It wouldn’t be the first time…but he’d hoped they’d done with the past. Ugh, second-guessing himself again. He couldn’t afford the drain on his confidence today.

The toaster oven tinged. With a fork, he dragged out the bagel. He loaded it with butter and the homemade strawberry jam his mother had made.

He didn’t trust much of humanity, long before he’d become a cop. Hank didn’t want the scum bleeding into their relationship. Distrust bred more distrust. He often found it tough to leave the hard-guy persona behind at the office, to let his softer side out around Len. It’d been difficult when they first met, but Len had been patient. Well, Hank would be patient too. What if a family issue had set off Hank’s alarms, a secret Len didn’t want to share yet?

He’d demolished the bagel as the wheels turned in his head. Sucking on his sticky-sweet fingers of one hand, he opened the fridge with the other for a second bagel. Last night’s dinner sat wrapped in cellophane on the shelf.

He had to talk to Len. But first, where did he leave the damn file?

Heloise West, when not hunched over the keyboard plotting love and mayhem, dreams about moving to a villa in Tuscany. She loves history, mysteries, and romance. She travels and gardens with her partner of fifteen years, and their home overflows with books, cats, art, and red wine.