You are here: Home / New Releases / Outside the Lines by Anna Zabo (@amergina) #giveaway

About Outside the Lines

Miniature artist Ian Meyers has one week to rebuild his damaged set. Needing help, he goes to End o’ Earth, the local comic and gaming shop. Owner Simon Derry pushes all of Ian’s buttons, and he also has steady hands and the skills Ian needs. 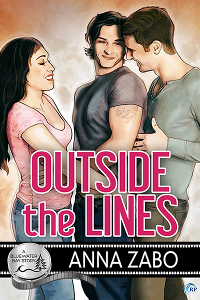 Ian’s all in, and it’s fantastic working with Simon to piece together his set and then take each other apart at night. His friendship with Lydia grows too. The only problem is, the more time he spends with Simon, the more he wants everything Simon already has with Lydia: A house. A cat. A commitment. So Ian runs, and shatters the trust he has with them both—right when they need him the most. Piecing their relationships back together might prove harder than a smashed set. 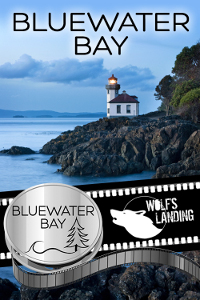 Welcome to Bluewater Bay! This quiet little logging town on Washington state’s Olympic Peninsula has been stagnating for decades, on the verge of ghost town status. Until a television crew moves in to film Wolf’s Landing, a soon-to-be cult hit based on the wildly successful shifter novels penned by local author Hunter Easton.

Wolf’s Landing’s success spawns everything from merchandise to movie talks, and Bluewater Bay explodes into a mecca for fans and tourists alike. The locals still aren’t quite sure what to make of all this—the town is rejuvenated, but at what cost? And the Hollywood-based production crew is out of their element in this small, mossy seaside locale. Needless to say, sparks fly.

Check it out at Riptide Publishing!

Anna grew up in the wilds of suburban Philadelphia before returning to their ancestral homelands in Western Pennsylvania. As a child they were heartily disappointed to discover that they couldn’t grow up to be what they wanted (a boy, a cat, a dragon), so they settled on being themself whenever possible, which may be a combination of a boy, a cat, and a dragon. Or perhaps a girl, a knight, and a writer. Depends on whom you ask. They do have a penchant for colorful ties and may be hording a small collection of cufflinks.They can be easily plied with coffee.

To celebrate the release of Outside the Lines, one lucky winner will receive a $25 Riptide credit! Leave a comment with your contact info to enter the contest. Entries close at midnight, Eastern time, on December 23, 2017. Contest is NOT restricted to U.S. entries. Thanks for following the tour, and don’t forget to leave your contact info!