You are here: Home / New Releases / The Prince and the Pencil Pusher by Kenzie Blades (@goindimarketing) #giveaway

Bad things happen when supos go unchecked. That’s why Abarra needs The Ministry: to keep tabs on royals with powers run amok. Queen Maialen has entrusted the safety of her subjects to her nephew, Prince Xabier, placing the agency in his capable hands.

Only, the Prince would rather spend his days putting his own power to good use in the vineyards than to wither away on the bureaucratic vine. Tired of policing perpetrators and babysitting bean-counters, he schemes to groom his first lieutenant (and second cousin) the Duke of Shrubs. After months spent moving chess pieces, he is poised to convince the Queen to assign his cousin to his post.

But an unlikely pawn still stands in his way: the sexy Zain Otxoa is the pushiest pencil-pusher in all of The Ministry and head of internal affairs. Prince Xabier has plotted to have him fired at least thrice. Zain’s influence over the Queen—his only saving grace—is baffling.

When a master maneuver to have Zain reassigned exposes a shocking imbroglio, Prince Xabier learns The Ministry isn’t what it seems. And Zain isn’t a pawn at all. 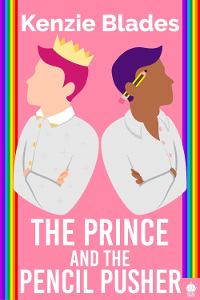 My heels clicked in rapid succession as I walked down the centerline of the grand executive hall. It was far afield of the offices on lower floors. It took minutes to get all the way up there, which was why I’d needed to make haste. Left unattended on nights when he would rather have been any place but at his post, the Prince had a tendency to disappear.

The floors were made of marble and their design was quite ornate—a wide white border off to each side, with an elaborate design forming a runway down the middle. It wasn’t a pattern, but a work of art, its geometric pieces reminiscent of stained glass. It gave the sense of walking on a rug made of stone.

Hues from garnet, to ruby, to tawny, to rose made up elements of a palette that swirled and faded to ambers and golds. They complemented magnificent oil paintings of Abarran countryside that lined the grand corridor’s high walls. Spaced-out sitting benches rendered the space worthy of entertaining. Yet, he kept it to himself, and spent most of his time alone.

The downstairs offices were another story. They were filled with six-by-six-foot cubicles configured en masse for the Ministry’s rank and file. Enclosed offices here and there were reserved for mid-level managers: MLMs, as we liked to call them. I inhabited one of the better of these offices—a space in the corner on a higher floor with a not-bad view—though an MLM I was not.

Ostensibly, I was the Head of Internal Affairs, which was exactly her intention—a gross understatement considering my deep involvement with the covert side. Not making that last fact public was by design. My list of responsibilities was too long to name—too long for me to remember most days. Yet, the highest of my duties was to babysit him.

He was Prince Xabier Garrastazu, third in line to the South Abarran throne, son of Prince Frantzisco, nephew to the Queen, and Duke of Brix. He was also the Minister of Powers—the highest-ranking official at this agency and—despite my charge to keep him from making too big a mess out of things, he was—technically—my boss.

“Is he in?” I asked Eusebio, more for his benefit than mine. I knew the Prince’s comings and goings. I had eyes on him at all times. I tried not to roll my eyes as Eusebio made a production of picking up the phone to announce my arrival. The Prince enjoyed forcing me to wait to be let in.

The more ridiculously childish and infuriatingly vain Prince Xabier, Duke of Brix, chose to be wherever I was concerned, the easier it was to ignore his ridiculous appeal.

“Your Grace.” As usual, I greeted his back, the part of him that always seemed to face me when I walked into his suite. Even from behind, the man was magnificent. Broad shoulders filled out a perfectly tailored button-down made of fine fabric and subtle herringbone design. Today’s shirt—white if you weren’t paying attention—was the faintest of lilac. He was the epitome of a dashing prince.

To be clear, I was paying attention, not only to the way its snug fit showed the definition in his shoulders—to the place where the fabric stopped and his rolled-up sleeves gave way to skin. For all the hard work he didn’t do, there needn’t have been any rolling up of sleeves. In my most outlandish of theories, he did it to torment me.

“Mr. Otxoa,” the Prince greeted blithely, not turning toward me just yet. He stood on a rug in the sitting area with his gaze remained fixed on the fire. His office was a projection of the man himself—pleasantly fragrant, clean to a fault and dripping with style. Tufted wingback chairs with ottomans flanked a matching Chesterfield, all three in a dark teal.  Fire glow warmed his features, casting appeal on the planes of his face, flattering the smooth line of his nose and cutting shadows from his diamond jaw.

I stopped at the edge of the rug next to the drink trolley that carried only wine. Its twin at the other end of the Chesterfield was all crystal decanters and spirits. When he turned, I was meant to bow out of deference. This was always the most difficult moment—the one when he first cast his gaze upon me. I faltered at the devastating beauty of his eyes.

“And what have you for me tonight? More documents to sign, no doubt. More supos with powers run rampage?”

He made no secret of the fact that my presence vexed him. Unencumbered by the burden of common birth, the Prince was under no obligation to feign politesse. Logic dictated that his resentment stemmed from me holding him to task. Instinct told me that the sport he made of pushing my buttons was something more.

The Prince finally cast his sapphire gaze upon me and I did bow then, thankful that the deep hue of my skin made it easy to hide my flush. Blood that he could not see rushed to my cheeks and prickled my nose and burned the tops of my ears. If he resented me, I, too, resented him. Training the Prince was not supposed to be so difficult as this. 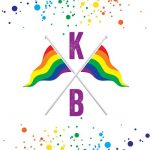 Kenzie Blades is a queer author of romantic LGBTQ+ fiction and is the alter ego of a multi-award winning author who writes other fiction under a different name. Kenzie lives in San Francisco and enjoys lots of things that start with the letter B, like bacon, bourbon and books.