The Right To Remain Silent

He never expects to find her there…

Officer Quinten Blackthorne is working undercover to bring the Rudnikov Mob Empire to its knees. He never expects to find his best friend’s baby sister, Becca, in the center of a powder keg situation at the infamous mobster’s home. With her life on the line, he does the only thing he can think of to save her – he pretends that she’s his fiancée, who knows nothing of his clandestine activities with the criminal enterprise, and stands as her stalwart protector.

But Quinten never expects the mob boss to force them into marriage at gunpoint as a test of loyalty. Not to mention, the idea of her belonging to him isn’t unappealing, nor is he as averse to the prospect as he lets on. Becca, with her sweet curves and take no prisoners attitude, fascinates him, stirs him, and leaves him craving her submission. Yet his past is fraught with broken dreams and death, so he uses his friendship with her brother as a shield against his yearning to claim her as his own.

However, circumstances soon compel Becca and Quinten to become the most unlikely allies in a deadly game of deception. Now they must depend on one another for survival. As they race to unlock the keys to breaking the case, will Quinten be able to maintain his hands-off policy with Becca? Or will he surrender to the earth-shattering passion and turn their marriage of convenience into the real deal?

Publisher’s Note: This steamy friends to lovers romance contains elements of power exchange. While it’s the third in the Crescent City Kings series, it can be enjoyed independently. 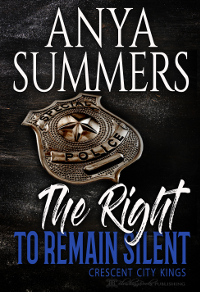 She imagined even the Hell’s Angels motorcycle gang moved out of Quinten’s way when he approached. In front of the entire crime entourage, he snarled, “What the fuck are you doing here, Becca?”

Rudnikov glanced between them, speculative interest and suspicion in his dead gaze. “You two know each other, Quinten?”

Quinten grabbed her hand and squeezed her fingers. Hard. Like he was trying to pass along a meaning that she still didn’t understand—mainly because her entire day had taken on a weird damn Twilight Zone bent, with danger and betrayal filtering in through every crack. Quinten, with her hand still gripped in his much larger one, turned to Rudnikov and said, “Yes, we do know each other. She’s my fiancée, sir. She doesn’t know that I work for you.”

At the pressure on her hand, and Quinten’s declaration, Becca stared at Quinten like he had gone mad. Fiancée? What the hell? What was the man playing at?

“Is that a fact? I don’t see a ring on her hand,” Rudnikov replied, his face an inscrutable mask.

That was it. They were dead. Her story would end, here, now, holding Quinten’s hand. On the bright side, Becca thought, she wouldn’t die alone. Tension oozed in the room. She’d frozen and even forgot to breathe. The guards had their hands in position against their firearms. Becca prayed she wouldn’t pass out or pee in her pants in terror.

“That’s because she’s miffed with me. We had a fight the other night and she took it off. But she loves me.” Quinten stared down at her from his six foot plus height, his cognac gaze imparting a play along message while he pretended to be a man besotted.

Becca didn’t understand—any of it. Not why Sasha had betrayed her trust, or whether Quinten was a dirty cop and only coming to her rescue because he was friends with her brother, or whether the mob boss intended to let her walk out of his house alive.

“Is this true, Miss O’Malley?” Rudnikov asked like he was daring her to dispute Quinten’s outlandish claim.

Pain shot up her arm from her hand as Quinten squeezed. Becca tried to keep her expression serene. Doubt shrouded Rudnikov’s hard glare. Better to have the crime boss believe she was with Quinten than alone and at his mercy. With a silent prayer, she tossed her lot in with the devil she knew. “It’s true, Mister Rudnikov. I’m engaged to the big lug—for now, at least.”

“And why just for now?” Rudnikov’s stare made her want to squirm. But she held it together—barely. Staring Rudnikov in his eyes the color of mahogany, Becca knew what it was like to stare evil in the face. The man would have no qualms about ending her life, right here, right now. The bastard wouldn’t even flinch at the blood spilled in his ornate sitting room.

“Because the blasted man keeps dragging his heels. Any time I try to set a date, he gives me the runaround. He’s the one who proposed and made me all insane with wanting the whole fairytale wedding deal. It’s almost like he doesn’t want to marry me, and I took the ring off until he’s willing to set a date. And why didn’t you tell me about all this, sweetie?” She glanced at Quinten and found approval there.

Rudnikov chuckled and said in a deprecating manner, “Because business is the providence of men, Miss O’Malley… and to show that there are no hard feelings, I will help you young lovebirds out. I can’t have one of my men breaking a vow with my newest business associate, now can I? You’ll marry. Tonight, in fact. Robbie, call Father Vincent. Ask him to be here within the hour to perform a marriage ceremony.”

“But, but… I don’t think—” Becca sputtered. Marry Quinten? Was Rudnikov serious?

Quinten’s hold on her hand tightened even more. She wondered if she would have any bones left before the night was over, or if they would crack into jagged pieces. Quinten protested, “Sir, that’s a generous offer. But she wants a big church wedding and I don’t—”

Rudnikov waved him off. “Nonsense. It will happen tonight. You can always do the fancy wedding later.”

Becca opened her mouth to refuse but shut it again at Rudnikov’s piercing glare. In the game of chicken, he had called their bluff and was waiting to strike. Becca moved closer to Quinten, choosing her side.