After an unfortunate mishap, Robbie has to learn how to use his Command abilities. Just when he thinks that it’s safe to turn them off entirely, he is challenged in a way he never imagined and is faced with the decision to use his abilities or lose his beloved cousin for good. His growth puts a strain on his budding relationship with Theo who is already stretched thin with his own dilemmas. Will the couple grow from their individual struggles, or will this be a final dividing point?

This is the third book in the Crossing Nüwa series and a continuation of Robbie and Theo’s relationship growth and struggles. 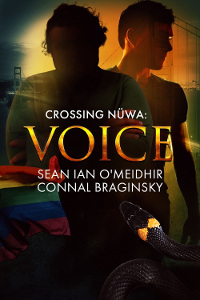 “Oh shit!” I cursed, spitting out the flavor of another man’s unwanted lips on mine and chafing my lips as I fervently wiped my mouth on my sleeve.

With small bony hands, he grabbed both of my arms. “Robbie,” Brent said. His high-pitched nasally voice, which had always annoyed me a little, now grated on every nerve. “You know you want me as much as I want you. Stop playing hard to get.”

I couldn’t believe this was happening. At school! I glanced around the empty college hallway for anyone to potentially save me, but classes were in session. I felt more than saw Brent lunge in for another kiss, and my lua training kicked in. Thrusting into his solar plexus with one palm, I snatched his wrist and wrenched. As he fell, I twisted him, catching his chin in my left hand, and by stretching him out I was able to face him away from me.

“Oooo,” Brent cooed, kneeling from the ground. “You like it rough. Robbie, I never knew.”

Brent pulled his small frame up, standing and looking up at me with a twisted smile that made me cringe. “You know we’re more than that. I don’t know what you see in that fat dude you call a boyfriend. You’re so much hotter than that. Deserve someone like me. Come on; let’s cut biology and get out of here? They know we’re working on that project anyway.”

I caught him as he moved in again. The scent of his sauerkraut-covered hot dog lunch wafted from his breath, making me shudder in revulsion. “Just stop!” I shouted, not caring if someone overheard, and pushed him back with all my strength.

He hit the other wall looking stunned and then slumped to the ground.

“Oh,” I exhaled. Nüwa are stronger than humans. What if I…?

Bending down, I gingerly pushed him, almost expecting a horror film scene of him grappling me down. He just rolled over, looking peacefully asleep.

Scrambling, I stumbled away. And then ran.

I had thrown myself into cooking the moment I got home. Ms. Gomez, our live-in housekeeper and cook, kindly let me use the kitchen while she took off to the store. The new pasta maker I got online dominated my attention until it started slipping back to Brent. Maggie’s voice rung out in my mind, reminding me to compartmentalize—to put this experience in another box in my mind. And shut it. Lock it. Learning to tuck away the memories from childhood that left me feeling vulnerable had kept me sane this past year.

The memory of holding my mother’s lifeless body after she had sacrificed herself to save me came unbidden to my mind, and once again, I was awash with that guilt. The deep cleansing breath helped to center me, and I imagined settling the top on that box again.

As I thought more about it, it seemed like I was compartmentalizing other things too. The time we spent in San Diego lived in one box and my time spent in the oasis of my home with Theo in yet another. I found that I was a different person in each context. With Theo I was most at ease. He knew me better than anyone, even Maggie, though I had spared him the sordid details about my childhood. There was never any guesswork with Theo. He loved me unconditionally and was always there for me. I could be myself with Maggie and Abi, too, but felt a wall with them. I know it’s because they’re women and Nüwa, and Mother and my aunt instilled in me a fear of both and an internal need to be deferential. So, I knew what the wall was; I just didn’t see a way of getting past it. And part of me didn’t want to. They were both amazing, and loving, and kind. And nothing at all like Mother and my aunt. So, they deserved my respect and deference.

And college was another box. I groaned loudly, channeling my fury into my whisk, hitting the sides of the bowl in a frenzy. The cream sauce I was making from scratch for the Italian sausage lasagna spun around in a vortex inside the bowl. How could I go back if Brent was there? The idea of confronting him… But the idea of not going back to college left me with a sense of dread.

I let out a yelp and spun around to see Theo casually leaning on the counter. How long had he been there?

“What’s up?” His question had a cautious tone.

“Cooking,” I muttered, turning my back to him and focusing on pouring the sauce into the pan that I had already layered with pasta, meat, and cheese. Heat stained my cheeks with just the thought of telling Theo about the kiss.

The weight of his stare on my back was a tangible thing, and I was relieved when his phone sounded. He let it ring longer than he normally would, but then answered and left. Relief slumped my shoulders. I would put this whole thing in a box. The Brent box. It belonged on a shelf with all the other bad memories and mistakes. Tonight, I was going to have dinner with my family: Kat and Theo. But first, I would need to meditate and get calm. All this rumination was getting me absolutely nowhere.

One lucky winner will receive a $50.00 NineStar Press Gift Code!