War hovers in the wings with the fate of the Republic at stake when the old doge dies. Fourteen-year-old Nico, a street urchin from the poorest Venetian parish, is chosen at random to tally votes in the upcoming election for a new leader. Uprooted from his old life and transplanted to the doge’s palace, Nico becomes an alienated outsider at the mercy of scheming nobles.

END_OF_DOCUMENT_TOKEN_TO_BE_REPLACED

When Desmond goes off to college, he allows himself to be more open about his attraction to men rather than the secreted-away experiences he’s had in the past.

As Desmond grapples with the pressures and expectations society forces upon him, while trying to understand what his heart is telling him to do, he is initiated into a high-class gay underworld and attracts the attention of an influential—and potentially dangerous—closeted businessman.

END_OF_DOCUMENT_TOKEN_TO_BE_REPLACED

The summer of 1964. Four teenage lives intertwine as each searches for love, identity, and a passage through painful family conflicts, social isolation, and the confusion of sexual orientation.

END_OF_DOCUMENT_TOKEN_TO_BE_REPLACED

Top-notch witch taker Sebastian “Bass” Wright is a lawman with a keen sense of justice. Outlaws shudder in fear when they hear his name. Bass is very dedicated to his job which leaves no time for relationships. When a series of murders take place in Fort Creek, Texas, Bass is sent to investigate and capture the killer. During his first day in town, he meets the brothel owner who sparks more than his suspicion.

END_OF_DOCUMENT_TOKEN_TO_BE_REPLACED

It’s the summer of 1967 and the Sexual Offences Act has just decriminalized consensual gay sex in private between two men over twenty-one. Percy Wright and his friend Les Baker have both taken temporary jobs teaching English as a foreign language in London during their long summer break from teaching at a rural boarding school near Oxford.

Thirty-three year old Percy is keen to soak up some theatre, music and general culture, whilst the younger Les is also keen to experience the varied gay social scene. When Les picks up a man called Phil at the box office of the Albert Hall when he goes to buy tickets to a Promenade Concert, Percy inadvertently gets thrown together with Adrian Framlingham, Phil’s friend.

END_OF_DOCUMENT_TOKEN_TO_BE_REPLACED 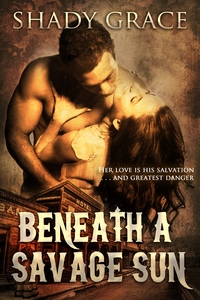 BENEATH A SAVAGE SUN