LA cop Jericho Crewe got the hell out of Mosely, Montana, when he was seventeen. Fifteen years later, he’s back, and everything is just as messed up as when he left. He planned a quick visit to deal with his injured father, but of course things are never that simple. Family complications, police complications, social complications—and, as always, Wade Granger complications.

Jericho and Wade had been so close, once upon a time. First friends, then more than friends—and then, after Jericho’s escape, nothing. Wade’s magnetism hasn’t been lessened by a decade and a half apart; even when Jericho learns that Wade is the prime suspect in the death of Jericho’s father, the old connection still sparks. 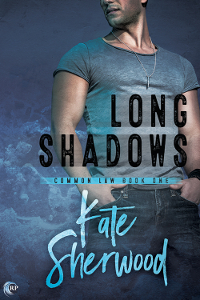 When Jericho’s newly discovered half siblings are kidnapped, he needs to trust someone to help him find them. Wade’s a terrible choice, but Jericho’s never been known for his good judgment. Anyway, he’d rather make a bad decision with Wade than a good one with anybody else.

Kate Sherwood started writing about the same time she got back on a horse after almost twenty years away from riding. She’d like to think she was too young for it to be a midlife crisis, but apparently she was ready for some changes!

Kate grew up near Toronto, Ontario (Canada) and went to school in Montreal, then Vancouver. But for the last decade or so she’s been a country girl. Sure, she misses some of the conveniences of the city, but living close to nature makes up for those lacks. She’s living in Ontario’s “cottage country”–other people save up their time and come to spend their vacations in her neighborhood, but she gets to live there all year round!

Since her first book was published in 2010, she’s kept herself busy with novels, novellas, and short stories in almost all the sub-genres of m/m romance. Contemporary, suspense, scifi or fantasy–the settings are just the backdrop for her characters to answer the important questions. How much can they share, and what do they need to keep? Can they bring themselves to trust someone, after being disappointed so many times? Are they brave enough to take a chance on love?

Kate’s books balance drama with humor, angst with optimism. They feature strong, damaged men who fight themselves harder than they fight anyone else. And, wherever possible, there are animals: horses, dogs, cats ferrets, squirrels… sometimes it’s easier to bond with a non-human, and most of Kate’s men need all the help they can get.

After five years of writing, Kate is still learning, still stretching herself, and still enjoying what she does. She’s looking forward to sharing a lot more stories in the future.

To celebrate the release of all four books in the Common Law series, we’re giving away one four-tour-wide GRAND PRIZE of $100 in Riptide credit! Enter at each stop on each tour (once they go live) to maximize your chances to win! Leave a comment with your contact info to enter the contest. Entries close at midnight, Eastern time, on April 8, 2017. Contest is NOT restricted to U.S. entries. Thanks for following the Long Shadows tour, and don’t forget to leave your contact info!